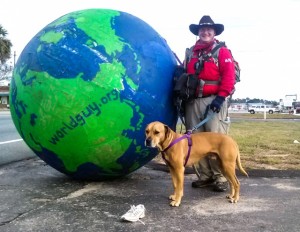 Photo of the WorldGuy, Erik Bendl and his dog, Nice

This project has taken me on many journeys. On one such journey I was traveling from New Orleans back to Pensacola when I happened upon a man walking a remote stretch of highway in Mississippi, pushing a large inflatable globe with his dog following alongside. Needless to say this caught my attention. Immediately I thought how cool it would be to get a picture of him next to a Lost Sole. And I had just saw one sitting in the berm, just a few miles back. But I was late for an appointment and had to move on.

I stopped for lunch about a half hour down the road and my mind was still fixated on regretting the fact I did not have time to get the shot with him. Then I decided I had to find out more about him so I googled him on my phone. I thought for sure he was getting media attention somewhere or doing an online blog. And I was correct. He had both going on. His website, worldguy.org was functioning as his travel diary. I discovered his name was Erik Bendl and was from Louisville, KY. I learned he was walking across the Southeastern United States to raise awareness for diabetes. To make a statement that all we need to do is walk everyday for exercise to help combat the disease. No big sales pitch or complicated plan, just eat right and walk.

His cause hits home with me as I lost my father to complications from diabetes, and my wife Sharon’s grandparents passed early because of it, her mother has it and so does her sister. So I felt an urge to contact him.

On his website site he had his phone number, and I figured I would call, hoping it was a good chance the number was his cell phone. The call went through and after a few rings he answered.

I explained who I was and about my project, and proceeded to ask a favor of him. That when he saw the lost shoe coming up on the highway, would he get a picture of himself with it and send it to me?

He was very friendly, however he was taken back for a second at the odd request. With a tad bit of skepticism in his voice he agreed to do it.

Later that night I got an email from him with the image of his globe, and dog in the picture with the shoe. He was unable to get himself in the photo, as he had to be the photographer. I thanked him and added it to my archives. I also did a blog entry about him to help him gain more awareness for his cause.

Over the course of the next few months, every so often I would get an email (or three) containing images of lost soles he was coming across. He has gained his own gallery on my One Shoe Diaries website.

Erik has just embarked on a new walking journey. It started in Tennessee but got detoured due to bad weather. He proceeded to drive to Pensacola to start walking east towards Jacksonville where there was no ice and snow. He is not sure what his final destination is, and is playing it by ear. He may heads towards Miami perhaps.

Upon getting into my neck of the woods he messaged me through Facebook to say hello. I arranged to intercept him for breakfast somewhere on his route to finally meet each other in person, along with his dog Nice.

It was an interesting breakfast. I listened to him tell me stories from his adventures and I asked him several questions, and I want to share some of what he told me.

His dog, Nice, is his constant companion and never seems to tire. He gets very excited when they start out on adventures. Nice is a protective dog. Not mean at all, just protective. Such as he does not like people messing with his “ball”, a.k.a. the globe. He will just nudge if you touch it, but gets angry if you start messing with it too much. So if you see them on the road, respect that the globe is his. Especially if Erik is not around, because he has to tie Nice up with the globe when he goes in places. And Nice will guard it.

He joked with us about his travels through Louisiana, and how amazing it was that he actually gained weight while walking all those miles from all the nice people who cooked him real southern comfort food, and handed him tea so sweet it swished like syrup in the bottle. Everyone was trying to feed him. When looking back at a photo taken of himself when he finished walking through Louisiana, he referred to himself as looking like Uncle Fester from all the weight gain. He has thankfully taken that weight back off.

Through his many encounters with people he has acquired many gifts from them. A reflective neon work vest from a DOT construction crew in Oregon, his backpack was given to him by an soldier who used it while serving in the military in Iraq, and many others I didn’t get the chance to ask him about were hanging from his pack straps.

He did tell us a story of a woman who was very kind to him and invited him into her tiny living space for a soda. Once inside he noticed the whole dwelling was in disarray except for the VCR area, where a pristine copy of the movie Misery was perched perfectly. It made him a little nervous especially when he noticed the door had been locked, dead bolted, and chained. When she went back to refill his drink, he made his exit, saying goodbye and thanks as he move out the door. Looking back, he recalls that “she even looked the part played by Kathy Bates, right down to her hair color and clothes.”

One of the only states whose Highway Patrol harassed him was in California. They did not allow him to continue through their state rolling the globe on their highways. Other than that he has been well received by both police departments and fire departments.

So many wonderful people he has met along the way have shared thousands of their own histories with Diabetes and how it affected their lives. A lot of them are not so happy, but on occasion, such as today, he hears uplifting ones.

Upon starting out from a Walmart parking lot in the morning he met a couple walking and they stopped to ask him of course what his mission was. When he said Diabetes the couple actually smiled. They had recently been diagnosed with the disease and started walking and eating right and have lost weight and feel better than they have in a long time. They were proud of what they were doing and planned on spreading the word to help others.

When I set out to meet him, I took my wife and child as well. I did not intend on getting any photos so I did not pack my big camera. But as luck would have it there was a lost sole just down from where I caught up to him. He had already passed it up, and so as not to make him backtrack his steps I broke one of my cardinal rules. I picked up the shoe. I took it to with me and threw it on the road outside Hardees where we had breakfast in order to get a shot of him with it. It does still reside outside the Hardees as that is now part of the shoe’s own story.

I was now regretting not having my Canon with me. I used my cell phone camera and the image is all right, it is what it is. Plus, since the One Shoe Diaries and his project are not about perfection but rather the moment, the photo is actually perfect I guess.

We said goodbye and parted ways, he was unsure where he was even heading, nor when he was going to stop for the day.

Perhaps I will catch up with him again someday and can do a really professional portrait of him. In addition, I hope he keeps sending me pics of lost soles. I really enjoy seeing someone participate in my project with me.

I wish him the best of luck and safe travels. The highways can be dangerous places.

For more information on him and his project go to www.worldguy.org