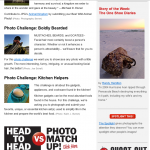 To commemorate the 1 year anniversary of the BP Deepwater Horizon Oil Spill, CNN did a followup article on a few popular iReporters at the time and I was selected as one of them, here is the link to the article. You will find our story about 1/3 down the page.

In addition to being the subject of the news, Randy has gotten some exposure from being the one reporting the news. On a whim he sent in an iReport to CNN which got immediate attention from the producers and was asked to do another report as an official iReporter. There were almost 100,000 views between the two in less than a week elevating him to Superstar iReporter status. He will continue to do reports when news warrants. Below are reports he has upoaded to date.


During the same time as Randy posted the first iReports, CNN did an iReporter Spotlight on him and the article is linked below.

If you would be interested in hosting a One Shoe Diaries exhibition please contact us at info@oneshoediaries.com Past exhibitions have been held in Pensacola, Rome (GA), Scottsdale, Los Angeles, Cincinnati, Baltimore, & Punta Gorda.