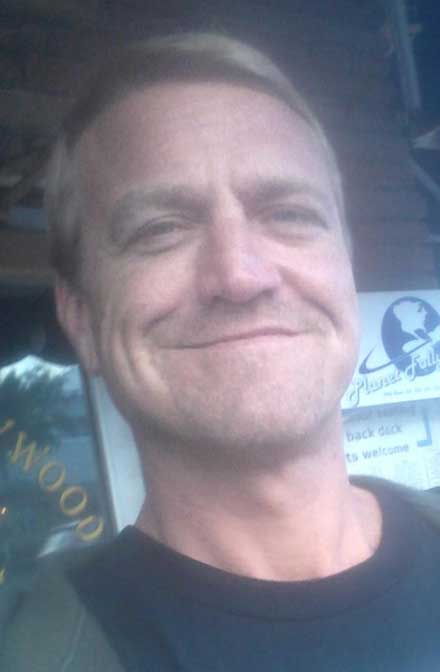 I dedicate Lost Sole #463, in honor of Thomas Thiel (1969-2013), a classmate and friend of mine. I have seen this shoe for a few days but never got around to photographing it, but today I felt compelled to add it to my collection to memorialize Tom in my own way. Rest in peace big guy.

I just got news from a grade-school classmate of mine, that one of our fellow classmates had lost his life the night before in a fire. I have written on several occasions about the strong bonds that were created during my grade school years among classmates, so news like this hits home pretty hard for me.

Not only did I go to grade school with him, but also graduated the same class in high school from the Catholic School, Moeller of Cincinnati. I probably have not seen Tom since our 10-year high school reunion. We were never really close friends, but still friends. More so in grade school, than high school.

We grew up playing baseball on the same teams for years. He was always the big kid in class, and very athletic so he excelled in everything he played. He was also very bright from I remember. Far from a typical big jock. What I do remember most was him laughing. He was always joking around and having fun. I vividly remember playing four square at recess where he dominated, and watching him lead our grade school basketball team. Which I think maybe his dad coached.

What is weird, is that many of my dreams I have as an adult, involve my grade school friends, and he was no exception. I recall waking up many times, wondering why the hell was Tom Thiel in my dreams. And in the dreams he was, sure enough, laughing and having fun. It was usually a reunion or party in the dream where many of our grade school friends were attending.

I guess those years were very formidable years and left indelible impressions on my psyche.

It made me sad to hear of his passing. My thoughts and prayers go out to his family. I recall them being very involved in our church at St. Columban in Loveland, Ohio, and expect they will have a large support system to help them.

And from reading an article I found from the local news in Folly Beach, SC, he was well liked by many and his laughter and generosity will be missed for a long time there as well.

Damn. The world lost a good guy today. Goodbye Tom, and God bless. I’m sure I’ll still see you in my dreams laughing, at least I hope I do.

The life of a friendly face on Folly Beach was cut short early Friday morning. 43-year-old Tom Thiel died of smoke inhalation while his apartment on Center Street went up in flames, according to the Charleston County Coroner.

Officials say the fire started shortly before 4 a.m. at Thiel’s second floor apartment. Folly Beach police say someone walking by noticed the fire and called police. Firefighters had the flames under control within 5 minutes.

Once the flames were out, Thiel’s body was found.

The small Folly community is now mourning the loss of the man who meant so much to so many by the beach.

“It’s just disbelief,” says a good friend of Thiel’s named Arnold. “I just don’t want to think of Tom being in that place when it was burning. It’s really hard just to look at this building.”

According to Arnold, Thiel let him stay in the apartment a handful of times when he was down on his luck. He says Thiel made him laugh and helped him when he needed it the most.

“You never know what you have until you lose something,” says Arnold, who decided to move back to Folly recently. “A lot of people are going to realize they lost a good friend today.”

Even those who didn’t know Tom feel the pain.

“It hurts everybody here,” said Charlie McCarty, who has lived on Folly Beach for 17 years. “Seeing the damage done on the rear of the apartment, that was scary.”

Now it up to investigators to find out how the fire started and it’s up to the small community help one another out, just like Tom did.

“He’s going to be a hard guy to get over,” said Arnold. “Other people you can talk about with a smile on your face but this is going to bring a tear to my eye every time I talk about him.”

Tom has friends all over Folly Beach. His friends say there really wasn’t a place that didn’t consider him a regular.

Hurley, the dog Tom shared with his cousin, was rescued from the apartment fire. Rescue crews say the dog tried running back toward the house multiple times after it was pulled from the building.

The cause of the fire is under investigation. As the story develops check Live5news.com for the latest information.