The sweetest woman in the world. We always felt this photo captured her soul

Today I lost a grandmother. Not my blood relative grandmother, but my grandmother nonetheless. Pauline Jessie Conner, affectionately known as Nanny, was Sharon’s grandmother and our Nora Jessie Hamilton’s namesake. Nanny was truly the glue that bound the family together, a true matriarch, so this past week has been so hard on the family.

Just a few days after getting home from seeing Nanny up in Baltimore, Sharon got a call that Nanny was taken to the hospital and that her kidneys were shutting down. We knew that Sharon had to get up there, and get up there quick so she could say goodbye.

Sharon flew out the next morning at 5:30 a.m. with Nora. It was a hard goodbye as I had not been a day without them since Nora’s birth. But Nanny needed them more than I did right then. So off they went to be at Nanny’s side along with Rachie who was flying in that same day. People were visiting and praying for Nanny from all over, she was just that type of soul that people gravitate towards. A beacon of goodness I like to think.

When Sharon got to the hospital Nanny was in alright spirits, she was happy to see everyone, but was also making peace in her life. Preparing to move on. She told people not to cry for her, that she was happy to go now and see Noah and her husband Jesse who passed many years prior. She did everything with such grace including this final act.

Nanny’s aging body held on for nearly a week after being brought home to in-home Hospice care. The family felt almost tortured by this. Having to see such a strong spirit just wither away. Sharon’s uncle Lenny visited and play his guitar and sung with Glenda for Nanny as well as did Sharon’s Pop. As uncle Lenny stated in an email “People came from all corners of the continent to say goodbye.” It was literally true.

At the end of the week Sharon and Rachie did not want to leave her side but they needed to fly out and get back home. They could not bare the thought Nanny would pass without them by her side.

On the morning to leave out, Sunday, September 26th Nanny breathed her last breath with everyone by her side, including her all her grandchildren, even Greg who flew in from Alaska. The family was all there. She left in peace.

The news struck me both as a relief and with great sadness. I know everyone has to go someday, we all will, but that does not always make it easy. But she lived a full life and loved with all her heart, in return she was showered with love until the very end. I will miss her. 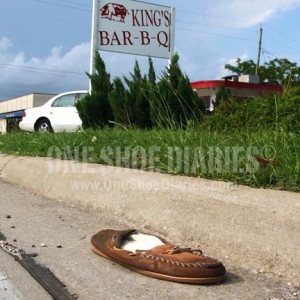 What I remember taking this photo and feeling very sad, because I just knew that someday this shoe would be dedicated in Nanny's memory someday. But what a great day we had!

I dedicate Lost Sole #244 to her. It has special significance to me. It was discovered during a lunch Nanny and I shared at the restaurant in the background. She had been visiting to see Sharon for a few weeks and while Sharon was working one day Nanny and I went out to the thrift stores and ate lunch together at the BBQ place in the background. We had a great day that day and neither of us ever forgot it and I never will. Like she told me the last time we spoke “Don’t ever forget me.” You do not have to worry, that will never happen, and your precious angel Nora never will either, we will see to that.

Speaking of angels, she always said she would be the first to see Noah in heaven and I am sure she is with him now along with others that passed before her. Especially her mother Nora, our little monkey’s namesake as well. Her mother died when she was an infant, so she will finally get to know her. I can only hope and believe there is a place we all go to after this life is over to be reunited with all of our loved ones.

I love and miss you so much Nanny. Thank you for taking me in as one of your own grandchildren. It made me feel so welcome. Goodbye old girl.