Jack Sanborn, Owner and Operator of Adventures Unlimited, canoeing down the Coldwater Creek

Tucked away, north of the Beaches, in the Blackwater River State Forest is a magical place called Adventures Unlimited situated on the banks of Coldwater Creek. It is an outdoor enthusiast’s heaven. You can kayak clear, spring-fed creeks that wind through thick vegetation, lined with white sand bars. You can mountain bike the local Black Bear Lake trail, or hike the Juniper Creek trail. And for those that like the rush of adrenaline there is a zip line canopy tour with 14 platforms that allow you to shoot across the tree tops and rivers. One line is even 900′ long!

The owner of the complex is Jack Sanborn. An older gentlemen with a passion for the outdoors. He is mother nature’s advocate and a voice for the environment for north Santa Rosa County. He is a very charismatic and personable man. When you meet him, you cannot help but become a fan of his.

I met him several years ago while on a photo assignment to photograph that end of the county to help promote ecotourism in Santa Rosa county. He was both the guide and model and is portrayed in many of the shots still used today in advertising the county.

It was a few years later, after I started the One Shoe Diaries that we met again out there while I was on a shoot. He seemed fascinated by the project as I described it to him. Sharon was pregnant with Noah at the time.

Once again I was out to photograph Adventures Unlimited and our paths crossed again. The first thing he asked me was how the One Shoe Diaries was doing and how being a father was. I was impressed he remembered. But that was just shortly after Noah so I told him the bad news. He seemed really distraught. He went on to tell me that he too lost a son, Andrew, at the age of 16. He was killed in an auto accident. My heart sank to hear that, I could not imagine how hard that must have been. It is so tragic to lose a child at any age. 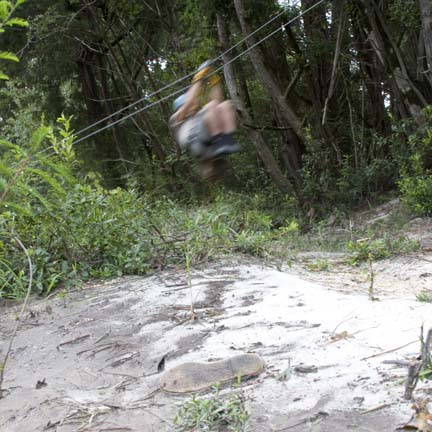 Lost Sole #371 lying under the zip line on the backs of Coldwater Creek, Dedicated in memory of Andrew Sanborn.

I had not been back out there since that day 2 years prior to this photo shoot on which I was heading back out there. This time I had Nora with me and was excited to have Jack meet her. As soon as I saw him he asked about my Lost Soles. He told me he thinks about me every time he sees one, which he sees them quite frequently on the river. I told him about the recent exposure by CNN and the birth of Nora. But she was not with me as she was fast asleep still in the van from the ride out. Jack told me about the Memorial Forest they are planting for Andrew, and the happy news of a recent grandchild being born bearing the name Drew as a tribute. It felt like some closure of sorts. Like things were healed and new life brought it all full circle.

Later that day while doing my photo shoot of the zip line tour, which by the way was a blast, I met up with Sharon and Nora in the forest. She said she saw Jack and introduced him to Nora. And while waiting on a creek bank to snap a shot of a speeding zip liner go by we found a Lost Sole, #371.

It seems very appropriate to dedicate this in honor of Jack’s son, Andrew Sanborn. I will never forget him or his dad. The world is a better place with people like Jack in it and I feel honored to know him.