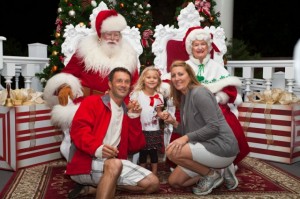 The family with Santa at Epcot. The last smiles of the day, before the cold trek back to the Ark.

After our experience of getting our butts kicked by the Magic Kingdom, we made it a point to plan ahead a bit. We did have a day in between parks and originally we were going to use it as a day off so to speak. However we were in Orlando, and we did have tickets to Disney Quest in Downtown Disney, so after breakfast we took off for more Disney fun!

Disney quest is pretty much a virtual type of amusement setup. There were multiple levels within the building and on the levels were videos games and interactive attractions like motion simulators and 3D shooting galleries. Most of which get me very naseaous so I abstained. We did have a good time, Nora got to run around and play so she got some energy out. The most memorable thing to me was the roller coaster simulator where you can design your own coaster and take a virtual ride on it. Of course I did not ride it, instead we decided that I could design it and Sharon would ride it. I probably could have made it a little more extreme, but not much. I intermixed large hills and pretzel like loops and twists. All the while Trish was helping me create it and was having fun as well until she realized the ride was set up for two people and she was going on it with Sharon!

The machinery was very sophisticated. They sat in a pod like vehicle and were tossed and turned, upside down and all around. I surely would have gotten sick. The best part was Nora and I could watch them inside being turned and churned from a camera who’s feed was displayed on a monitor outside. It was just black and white but I could swear I saw green on Trish’s face as she went upside down over and over.

We only stayed at Disney quest for a couple of hours and then opted to stroll the Disney Downtown shops. It was a warm day and were just took our time. Nora fell asleep in the stroller and we got to relax with a beer at an outside patio at an Irish pub. That would have been a perfect time to map out an attack plan for Epcot, but we didn’t do it.

There had been ads all over for the “snow” fall at Celebration. So after dinner we headed over there to check it out. If you have never been to the community of Celebration it is worth going once. As per wikipedia, Celebration is…

“Celebration is a census-designated place (CDP) and a master-planned community in Osceola County, Florida, United States, located near Walt Disney World Resort and originally developed by The Walt Disney Company. As part of the Orlando–Kissimmee Metropolitan Statistical Area, Celebration’s population was 7,427 at the 2010 census…
…Response to Celebration has ranged from an early visitor who said it resembled the too-perfect town of The Stepford Wives, to those who see Celebration as a return to small-town values with walkable and safe communities.”

Celebration is a little too controlled for me and plus I could never afford it so it will never be an issue. I do like to visit as it has that perfect Norman Rockwell feel to it. SO you can imagine what Christmas is like there. It had a synthetic ice rink, complete with synthetic snow that fell on the hour every hour. The snow was nothing more than a foam bubble mix that came out of sprayers mounted on the light posts. It was a pretty cool novelty though for the kids. Nora still has no idea what real snow is like. One day I hope she will get to play in it for real. Although she may not like it as she hates being cold. Her first, and only experience with real snow was just touching it after we drove and hour out of our way and she wanted nothing to do with it as it was too icy she said.

We got home kinda late and just went to bed. No discussion of Epcot, so once again we would just wing it.

The morning started off well, we got an early jump on the day by getting to the park around 9:30. It was a breezy, chilly and cloudy morning, which did throw us off a bit because the weather channel had called for fairly warm sunny skies. Luckily we had the Ark in the parking lot full of warmer clothes and jackets. Score one for the home team.

We did plan out some strategy on the way there and knew we needed Soarin’ fast passes first thing. So once inside the park, off to The Land we went. No problems there, we got the fast passes, did a few attractions before it was time to ride it. And then rode Soarin’. It was pretty cool I must say. A little short, but was a unique experience with the feel of hang gliding over California’s beautiful diverse landscape. Smells of pine and orange groves were even pumped in at the right times to complete the illusion. Being a lover of California I really enjoyed the attraction.

We went from attraction to attraction, just enjoying the day. All going pretty smooth except for the cold. It seemed to get colder as the day went on.

When we first started out in the Motor Home in 2004 we met a couple early on from Canada. We clicked with them and have remained friends with them, occasionally running into them here and there. This time they were in Orkando as well and met us at Epcot to spend a little time hanging out. They showed up with their faces painted and smiling ear to ear. And we would not have expected anything less. They have always just enjoyed life and taken it in. They have a great zest for life. The best way I can describe them is that they are 12-year-olds spirits trapped in mid life bodies (still in great shape) possessing the wisdom to know that life is precious and should be fun.

Unfortunately our schedule at Epcot did not allow us too much catching up time and we parted ways after an hour or so. We were on a mission to get Nora’s photo with her favorite princess and for whom she was dressed like, Snow White. We located her greeting area in Germany and awaited for her to return. It really did not take long to get our chance to meet her. Nora was a little nervous and overwhelmed so she acted quite shy at first, not even getting close to her like she didnt know if she were allowed to be so close to Snow White. After a little coaxing by a sweet Snow White, Nora was right next to her chatting. We got the photo and signature for Nora’s book and left with a twirl, which of course Snow White responded with a twirl as well. Nora was almost in shock as if still processing what just transpired.

The sun was starting to go down and it was getting even chillier now. We needed to eat and eat somewhere inside. The only place that had availability was the sit down service at China. 3 days in Orlando, 3 times eating Chinese food! We couldn’t complain much as it was warm and helped get us ready to make it through the evening.

We didn’t do much else than eat and drink our way through some more countries so to speak. Hot chocolate and pastries at Norway. Pastries and wine at France. We had beer and pretzels at Germany. Early in the day we had beer with fish and chips at the U.K.

Our evening was to end with seeing the candlelight processional narrated by Neil Patrick Harris, along with carrols sung by a large chorus of kids to the music of a 52 piece symphony. The stage was incredible with large decorated Christmas trees, wreaths and thousands of lights. It was quite the spectacle. The seating was full so we stood along the back fence but could hear and see pretty well. It also afforded us the option to leave easily. Which turned out to be a good thing because the line for Santa was short behind us because everyone was in the event. Nora was so cold and everyone was worn out after the Santa pic. It was time to get to the Ark. But the Ark was very far away :(

Trish made the observation of of how far it looked to get back to even the Epcot globe, making refernce to how it looked like was golf ball sized from this distance. It did in fact look tiny and a long way off! We just put our heads down and pushed through the crowds, trying not to look up or stop. And before we knew it we were back to the Epcot globe, heading past it and on to the parking lot. It was so good to finally make it to the Ark.

Exhausted and hungry we stopped for fish and chips, cake flavored vodka and mixers (Trish’s vice), taking it all back to the condo to enjoy. After eating and having a drink, sleep came quickly and easily.

If I had to keep score on this day, I would say it was a tie. While we started off great and got Snow White’s photo with Nora (a major goal), we still ended the day cold and feeling beat up. So the tally in Disney vs. The Hamilton Party: 1-0-1. We still have 1 more park to rally and win, so we were not defeated yet! Stay tuned… 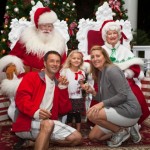 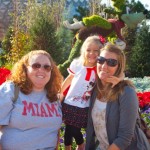 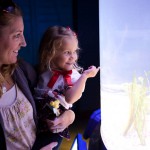 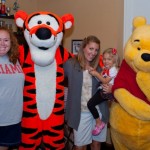 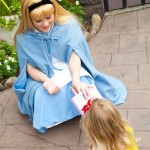 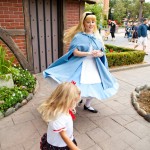 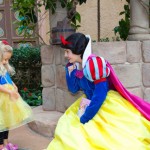 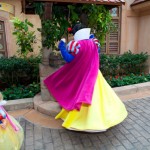