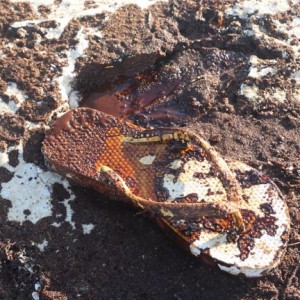 Dedicated to the dolphin whose life was apparently taken as a result of the BP oil spill. Lost Sole #359 was found covered in oil on that beach the same day he died.

It is the morning after I went out to Pensacola Beach to view the oil slick that had finally washed ashore from the BP disaster. The beach was surreal. The parking lot was full of TV crews and their trucks with giant satellite dishes perched on top. All lined up to report on the latest happenings. I have seen this here before during hurricane season’s.

When we got to the beach you could see quite a bit of people walking the beach, but not in swim suits. No one was here to refresh in the clear blue waters or relax on the white sand. They were all at the water’s edge staring at the sinister black pools of oil just deposited by the outgoing tide. Like the gulf just threw up. I could not believe what I was seeing. Our pristine beaches, with literally the whitest sand in the world, are now being assaulted by a nasty black and brown enemy caused by the human need to have cheaper energy. I am guilty as anyone else though so I cannot throw blame without taking it on myself. However I CAN blame BP for many reasons that I will not delve into because we all know the story.

As I walked the beach, snapping shots for myself and for others to see what is happening I of course came across a shoe. An oil covered and stained, white flip flop. It was to be my icon for this disaster so I shot away. I was with Sharon who on the verge of tears the entire time as she held Nora.

It was just 2 days ago were playing in the water at this same spot with Nora as she splashed her little arms in the gulf water for the first time. We wondered how long it would be before she could go back into the gulf. Would she be a year old by then? Maybe 2 years old? 3? How long will it take for this to all be cleaned up? It was really hitting home as my heart became heavy and a rage inside me swelled up with nothing to unleash it on. It wasn’t the BP crew’s fault that were just sitting in the tents doing nothing. It wasn’t the TV crews’ fault, who seemed like vultures but just doing their job.

So after I got the shot of my lost sole I headed over to Flounder’s to participate in the weekly volleyball tourney with my friends. No one spoke much about the oil, it almost seemed taboo. Like we all just wanted to remain in denial and act as if it were not happening because the immensity of it all was too great to contemplate yet.

When I got home I posted the images I took on Facebook for all to see and went to bed.

I awoke early but just laid in bed. And as I lay there, I started thinking about my shoe I photographed and how disgusting the oil looked covering it. My mind went back to remember how it all happened when 11 guys lost their lives on that oil rig. I pondered whether or not to dedicate this Lost Sole to them. Then I wondered about all the wildlife that had lost their lives, maybe it should be dedicated to them?

Then I got up and logged on to the internet only to find that a dolphin had lost its life off of Pensacola Beach and the reading the story brought a lump to my throat and tears to my eyes. I couldn’t help it. Right then I knew that that lost sole I photographed would belong to him.

So I dedicate Lost Sole #359 to the unnamed dolphin that came ashore at Fort Pickens on June 23rd, 2010. May you rest in peace and forever swim in the oil free waters of the afterlife. May you and this shoe remind everyone of the many lives, human and wildlife, that this tragedy snuffed out. 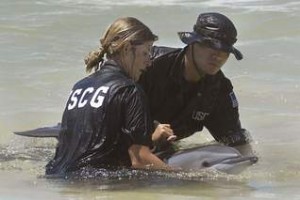 Coast Guard volunteers hold an injured dolphin in the shallow waters off Fort Pickens on Wednesday. The dolphin was found close to heavy oil. (Kaycee Lagarde/klagarde@pnj.com)

Here is the article I read from the Pensacola News Journal by Kaycee Lagarde and Bill Vilona – June 24, 2010

Christy Travis first saw oil splotched along the beach as she approached the surf at Fort Pickens. Then she turned and saw a bottlenose dolphin in distress in shallow water.

“It was heartbreaking. Everyone was crying,” said Travis, 41, who was visiting with her family from Arkansas when they discovered the dolphin and joined with others in attempt to save it.

The dolphin died while enroute to Gulf World Marine Park, a rescue facility in Panama City. 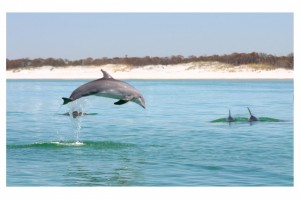 Taken by me several years ago while on the gulf on a beautiful day. Just thought it needed to be posted with this entry.

Once the dolphin was discovered, a three-hour ordeal ensued to try and save it in the water. Two U.S. Coast Guard volunteers and a Florida Department of Environmental Protection officer were involved in the rescue attempt.

Travis said people scraped oil off the dolphin with their hands.

“It was so sad. It just broke our hearts,” Travis said.

A necropsy will be performed to determine the exact cause of death, according to Courtnee Ferguson, a spokeswoman for the Unified Command in Mobile.

Brian Sibley, another United Command spokesman, confirmed the dolphin “had some oil on it.” But he said he wasn’t sure if that was the reason the dolphin beached itself.