Milton, FL: My moment of fame 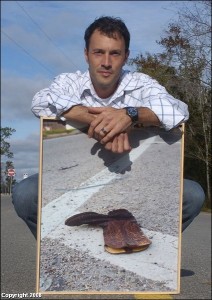 Pensacola News Journal recently did a great article on Sharon and I about the One Shoe Diaries. They even gave me the front cover. It was a large photo of me sitting on a raod with a shoe in front of me. Pretty cool other than the scowl look on my face :) They did include 2 other good photos inside I liked though. I clipped out the article from the Pensacola News Journal Pelican Magazine and pasted below. Thanks goes to Adam Ziglar for taking the story on and doing a great job!

Published – January, 30, 2008
The lost highway
Man finds shoes and more on America’s open road
ADAM ZIGLAR
aziglar@pnj.com
Like estranged carcasses, they lay in waiting. Punished by tires, soiled by exhaust and rain, brittle and sun burnt, they rot on the side of the road.

It’s not road kill, at least not in the traditional sense. It’s shoes.

Randall Hamilton has spent much of the last couple of years photographing lone shoes on the sides of roads throughout the United States.

What began as a desire to flesh out his creative impulses quickly became a life-altering project.

Armed with a digital camera and a head full of ideas, the 38-year-old freelance graphic artist and his wife, Sharon, have traveled in a motor home, crisscrossing across the country, creating a self-published travelogue that describes each of the more than 150 shoes in his book, “One Shoe Diaries.”

The couple, who currently lives in an motor home park in Milton, began his journey about a year after Hurricane Ivan destroyed their rented condo on Pensacola Beach. With most of their possessions destroyed, they were essentially homeless; they decided to take drastic measures.

“With the way the house prices skyrocketed and rent (costs) went nuts, we just decided to go into a motor home,” he said. “It was something that I had always dreamed of doing.”

The couple began traveling. They’d stay for about two weeks at a time at different stops throughout the country.

“That first year after the hurricane was pretty crazy,” he said. “We were trying to figure out the ins and outs about life on the road in a motor home.”

The journey also included the chance to visit dog parks with their two pugs, Jack and Jinger, and brew pubs, among other interesting stops. Each stop provided insightful stories, and Hamilton initially thought of creating a travelogue, with stories and photos, titled “Dog Parks and Brew Pubs.”

“I thought that had kind of a ring to it, but not the catch I was looking for,” he said.

Hamilton then started noticing single shoes adrift on the sides of roads.

“How? Why?” he asked himself. “A shoe isn’t something that falls off you and you don’t notice it. Why only one shoe?”

After walking along Pensacola Beach about a year after Hurricane Ivan, Hamilton noticed a single flip-flop half buried in the sand. He knew that was the hook, the quizzical curiosity from which he would base an entire journey across the country.

“As I started to look for them they started to pop up all over the place,” he said, remembering how he stopped his motor home repeatedly to photograph a shoe.

Sometimes laying on the ground to capture the right angle, Hamilton laughs when he thinks about what passersby must have thought.

“I’m sure people driving by thought I was a dead body,” he said.

For Hamilton, a deserted shoe on a lost stretch of highway is a work of art.

From a deserted Sponge Bob flip-flop to a gnarly cowboy boot in Austin, Texas, to a stiletto high heel cradling the edge of Mulholland Drive and a cliff, the Hollywood sign fuzzy in the background, Hamilton has found all kinds of shoes, each one a piece of art.

“We didn’t want to speculate how the shoe got there,” he said. “That’s part of the mystery and intrigue. Everybody sort of gets an image about who that shoe belongs to. I didn’t want to taint that all. We just told the stories behind discovering the shoe, the interesting people we may have met while on that leg of the journey.”

In all, Hamilton photographed 153 shoes along Interstate 10 from Florida to California. In all, the initial journey took about six months.

While launching a Web site, Hamilton discovered a strange twist. About six months after he completed his project, he discovered Julie Shapiro, an author that would soon release a book titled “Jen-Zen and the One Shoe Diaries.”

“I had already ordered a trademark for the ‘One Shoe Diaries’ and I had to call her up,” he said.

The premise of her story: a guy becomes obsessed with traveling throughout the country, photographing and exhibiting the shoes.

Hamilton called Shapiro to make sure she wasn’t copying his idea.

“I still think it was her genuine idea,” he said. “When I told her who I was, she thought I was kidding. She said, ‘You’re the character in my book.'”

Since then, the two have collaborated and help promote each other’s projects.

For now, he hopes to continue to promote his book and seek a publisher.

He hopes to do a book tour, retracing his original steps, and promote the book along the way.

In the meantime, he’s in the production phase of volume II, his second journey last summer from South Florida to Maine.

“People connect with this,” Hamilton said. “They see the shoes, too, and wonder how they got there.”