The Sands of Time. 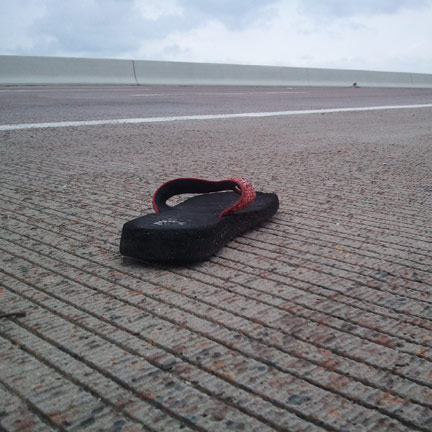 This shoe was found on the Highway 98 bridge in Panama City, Florida on our way home from a great weekend away. Nora finds it fun to stop and get pictures of lost shoes and I love that!

Since Nora’s birth, I have been having trouble keeping up with Life’s frantic pace. Between Nora growing up before our eyes and the bills that seem to come non-stop I have been losing track of time. Weeks seems like they only consist of Mondays Fridays and Sundays. I feel as if the sands of time are falling and I am trying in vain to catch them in my hand but they just keep slipping through my fingers.

Everyone knows this feeling I am sure, especially those with children.

In order to not have those moments forever forgotten I have to make attempts to write them down, if not for myself, but for Nora when she is older and wants to know what her early life was like.

Recently we took a small trip down to Panama City to attend their weekend-long, annual seafood and music festival. It highlighted the bands Better Than Ezra, Collective Soul, Loverboy, and Foreigner. The tickets were very inexpensive for the whole weekend and we also managed to trade a friend for a night at the Holiday Inn Vacation Club down there, so the weekend did not cost much.

Nora always has fun staying at hotels. I did as well growing up. I guess it just being somewhere new and the sense of adventure in the air. This hotel had an outdoor pool. Nora has been a water-loving child as of late. She cannot swim by herself yet, nor will she get her face under water. But she will swim for hours with her swim vest on if we let her. The day was a little cloudy and cool, maybe 75 degrees. However she swam for a long time before the drizzle of rain got her cold and she had to retreat to the hot tub, eventually calling it quits and getting out.

The room was very nice, complete with full kitchen with a center island and bar, living room, separate bedroom and 2 full bathrooms equipped with jacuzzi tub and huge tile shower.

The festival was a medium size crowd. Space was not an issue. The great thing was that they had a children’s area set up with multiple bounce houses. This kept Nora occupied almost the entire time. Night fell and our first band that we really cared about took the stage, Better Than Ezra. They sounded awesome and were very fun to watch. They were quite funny as well as they chatted between songs with the crowd. Nora stayed awake through them as we alternated back and forth for a while to the children’s area with her.

Next up was Collective Soul who we really were excited to see but were unsure how Nora would fare as it was going on 9:30 when they finally took the stage. Nora got tired about 2 songs into their set and I put on the Ergo carrier that I had so often used to walk her to sleep when she was smaller. She climbed in and I proceeded to walk the festival grounds. She did fall asleep and we got her into her stroller which is equipped with a nice pull down cover. We insulated her the best we could from the music with jackets and coats draped over the top. She slept like an angel.

When we got her back to the room she was still asleep in the car but woke up as we entered the room around 11:00. She was now wide awake and we were on the brink of exhaustion. We did not get her back to sleep until about 12:30. This night did mark the first night she ever slept in another room from us. She slept on the pullout couch. And slept well! We did not.

For some reason neither Sharon nor I sleep well in hotel rooms. The beds are never quite right, the noises from other rooms and hallways keeps us awake. We normally bring a fan to help drown out the noises but we forgot it this time. That did not stop us though from waking up the next day in a good mood. We were on vacation after all and on top of that Nora woke up happy. 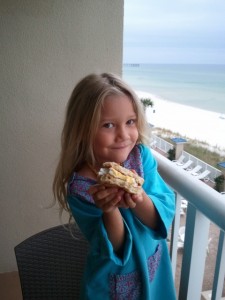 Nora enjoying her breakfast on the hotel room balcony.

Our room had a balcony over looking the Gulf which was just a few yards from the back of the hotel. The water was as calm as I have ever seen it, and crystal clear. Dolphins were playing just a short distance from shore. The air was warm. It was an awesome morning to go out for breakfast and bring it back to the room to eat on the balcony.

After we ate, the day started with a swim of course. After finally extracting Nora from the pool we set off for Historic St. Andrews for a day of exploring.

The small historic downtown was pretty cool. Lots of antique shops and restaurants. We sampled from several local eateries. Having Soup at one place, an appetizer at another and coffee at another. There was a farmer’s market set up that we perused, picking up some jelly, stuffed grape leaves and a few sweet treats. There was even a small jazz festival in the town’s main park to check out. While at the park we saw their famous four-headed palm tree. We had left our phones in the car so we were unable to get any pics of the town. But it was nice to be unplugged for a bit.

The time came to leave and the decision had to be made whether or not to attend the second day of the festival. We opted to just head back home instead of torturing Nora for a second evening, plus we were pretty wiped out.

On the drive back we did stop off to check out Rosemary Beach. They had a wine festival going on, and the people are just a little too high brow there for us so we did not stay there long. We just did not feel comfortable in that wealthy of an environment.

We opted to stop for food at Seaside. They have a nice row of upscale food trailers to eat at. We also grabbed some ice cream afterward before continuing home. It was a great weekend for us and one I wanted to write down so it would not slip into the abyss of time.

On side note. Over that weekend 2 convicted murders had escaped a prison in South Florida and were caught at a sleazy motel right next to a souvenir shop we stopped at just an hour before their capture. Sharon had even remarked on how shady those hotels in that area seemed. There is a very scary side to this world, one I wish I could isolate Nora from, but the reality is that it is all around us, whether we see it or not.