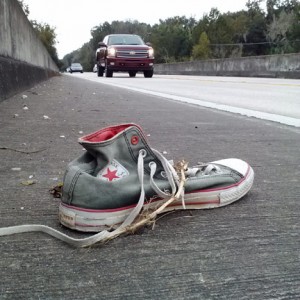 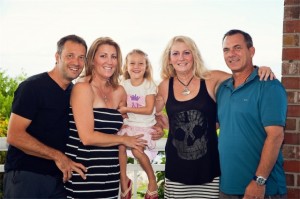 Lost Sole #489 found just outside of Alafia State Park. The image of us was taken during a family photo session we did in Punta Gorda.

Last year we went down to Port Charlotte over Thanksgiving and I ended up missing out on several photo sessions, almost a dozen. So this year we decided not to miss that holiday rush and left for Rachie’s house a week earlier than Thanksgiving.

The trip to and back to Port Charlotte, a total of almost 24 hours of driving went very smoothly. Which is a nice break from some recent trips in the Ark that went awry. We did do some modifications to our usual setup in the ark though. This time we setup one of the front passenger chairs to a bed for Nora. She has begun to finally sleep in her own bed at own. Not her own room yet mind you, but at least her own bed. But as with every milestone, this comes as bittersweet. We know we are losing our little girl to a big girl.

Nora took really well to this new layout in the Ark. She slept like a little bug in a little rug in her bed. The hard part was that I could not lay next to her to put her to sleep by my usual story telling and singing. I had to kneel beside her and pretend to be lying next to her to facilitate her falling asleep. A small price to pay so that we could get some sleep because Nora is a prolific mover and shaker when she sleeps which routinely placed her lying perpendicular between us. I know someday we will look back fondly on her days in our bed.

During our stay down south we did not do anything newsworthy so to speak. It was all about getting the grandparents and Rachie some time with Nora. It is very important to us that we get Nora as much exposure to her family as we can afford. It’s a shame we cannot lure Rachie up here but her work and animals do not allow her much freedom. Therefore it is better we go to her, especially in the winter since we like to escape the cold air in Pensacola.

Nora really opened up to them all down there. She had a great time. A highlight was one evening after dinner at a playground where she sang and danced around for her pop pop. She sang a made-up song about the planets that ended with a dramatic … “And Plu-u-uto-o-o-o-o-o.” Her imagination is really blossoming as of late and we love it.

Before we left we did explore Historic Downtown Fort Myers a bit, which turned out to be a really nice town. We visited the Shell Factory, which is a piece of Americana that needs to be seen to be appreciated. And on the journey home we stopped and stayed a night at the Alafia State Park Campground where before heading out the next morning I embarked on an Epic-rated mountain bike trail that at times felt like I was riding through an ancient tropical forest where dinosaurs still roamed. It was quite spectacular. I wish I had more time in my busy schedule to elaborate more on these locations, but writing time is short these days.

The trip overall was not very eventful but it was fun and something Nora really needed. Hopefully she will have her “Mee-Maw” & “Pop-Pop” for a long time to come and get to have many visits with them. Since we do not live near any family, we feel these types of trips are even more important for Nora.