Pits and Whiskers: An obsession 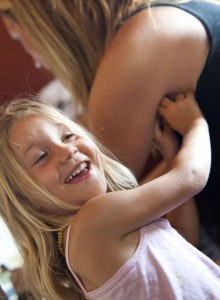 Nora as happy as a little lark, playing with Sharon's pits. She had asked me the day before to get a picture of her in her mommy's pits as she stuck her head in them. I dont know what I did with that pic unfortunately.

I have been wanting to get all of this down in writing so as not to forget it all, partially because it will become awesome blackmail material somebody, and also because it is something that is a big part of Nora’s young life.

Every child has his or her “security blanket”. Sometimes it might be a certain blanket, toy or something else that gives them comfort. For Nora her security objects are a little different. They are Sharon’s armpits and my unshaven face. Yes, I said Sharon’s armpits, affectionately known to Nora as the Pits.

It started at a very early age. While nursing Nora she would reach her tiny hand under Sharon’s arm and gently caress. It always calmed her and put her into a trance. She also slept with her head right in there, sometimes burying her face all the way in, breathing in deeply, like a glue sniffer would huff into a bag. She loved it! She even, strangely enough, lick them. That came to a stop quickly as it grossed Sharon out, and understandably so. That might be the part of the story, that when she gets older, will be the hardest for her to hear about!

It has become somewhat of a nuisance, especially when she tries to do it in public. We pretty much have that under control, but at home she becomes borderline aggressive, or OCD when it comes to them. She goes so far as to get upset when Sharon showers because she says sadly, “I love them when they are stinky.”

For most of you, this may seem a little odd, as it should. But like I said, I am getting this down in writing so I can torture her as a teenager in front of her friends if she ever gets a little full of herself.

As for my whiskers, it is not as much of an obsession as it is a past time when she is sitting with me or riding on my shoulders mostly. She does get giddy when she rubs them and hates when I shave them off. The only time I really don’t like it, is when she pinches my face as she plays with them. That gets me a little angry.

It is very sweet at times such as early in the morning when she reaches over and feels my whiskers with one hand and Sharon’s pits with the other, saying with a smile on her face, “pits and whiskers make me happy”.

I am sure in just a few months these obsessions will stop and we will miss them dearly. Talking about them will probably bring tears to our eyes because our little girl will be well on her way to being all grown up. Time moves so fast these days. I just cannot seem to get it to slow down very often. But when it does, I am usually snuggled up with my little girl rubbing her soft little hand against my rough, unshaven cheek.