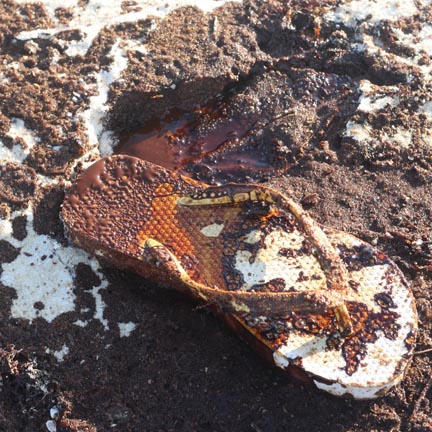 Looking back, I think I should have not only dedicated this to the dolphin that washed up on shore that day, but to all the men who lost their lives in the blast on the rig. I rededicate Lost Sole #359 to: Jason Anderson, Aaron Dale Burkeen, Donald Clark, Stephen Curtis, Roy Wyatt Kemp, Karl Kleppinger, Gordon Jones (M-I SWACO), Blair Manuel (M-I SWACO), Dewey Revette, Shane Roshto and Adam Weise. May you all rest in peace.

Well it is hard to believe a year has flown by, and wow what a difference a year makes. I know many are still reeling from the impact that the Deepwater Horizon spill had, and may never fully recover, especially those who lost loved ones in the initial blast that started in motion a terrible series of events. The true environmental events may not even be known for some time.

The big problem is that hidden pockets of submerged oil, commonly known as “tar mats” are still being discovered. However it is misleading for them to be likened to a mat because a mat is normally associated with something thin and flexible. Whereas these “mats” are inches thick, sometimes feet thick, and in no way are flexible. They would be better referred to as underwater parking lots. Because that is precisely what the chunks feel like. I have chunsk from a contractor that worked with BP to do recon to find these hidden tar mats had given me from one just offshore of Perdido Key, FL. That tar mat existence has since been announced to the public and has been addressed. 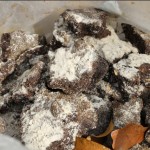 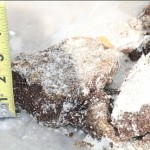 Having said that, I have been enjoying the beach and fishing in these waters for the last few months without so much as seeing a speck of oil. Could be the dispersant did its job and sunk it to the bottom and sand is covering it. Or it could be that the waters are pretty much clear. I dont know, but I do know the beaches and waters in Pensacola have never looked prettier. And tourism is back in full force. We had a great spring break in terms of numbers of tourists. If you didn’t get out to the beach before 12, you were going to wait in a long line to possibly only turn around because parking lots were full.

I anticipate this summer will be much of the same. There is a lot of optimism in the air which is much nicer than the despair that was ever present a year ago. The doom and gloom of the looming disaster just off shore was enough to make even a strong soul anxious.

I know that I am now much better off than I was a year ago and I am eternally grateful as I felt the stress could have killed me back then. I also know many others are not in that same place and my heart goes out to them. I can only hope we have a calm hurricane season and everyone can get back on their feet here on the Gulf Coast.