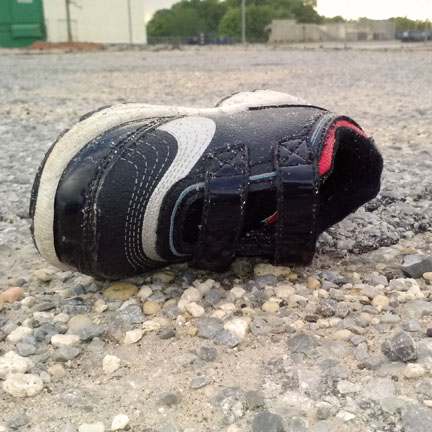 This shoe, Lost Sole #465, I dedicate to the 3 victims of the Boston Marathon Bombing.

As the Boston Marathon tragedy unfolded I was glued to the TV and online media outlets trying to find out more information. My desire to know what was going on was so great, and I imagine from the frenzy on social media, I was not the only one. I scoured through the new information that was continually being posted. And in that material I came across a photograph of the aftermath, right about where the bomb went off.

What emotionally struck me at first was the amount of, for a lack of a better term, carnage. Then I noticed the personal items that were strewn about. Items that meant so much to those victims just a little time before, meant nothing now, but were still a lingering essence of what made each victim an individual. They There were bags, purses, jackets, cameras, cell phones. And me being me, noticed a solo shoe lying there. Immediately a moral dilemma arose in my mind.

The journalist in me wanted to document and memorialize the victims and families by dedicating that Lost Sole to them. Even though I discovered the shoe in the photo while looking at the image, I did not physically discover it nor did I take the image obviously. So that was my first issue with it. Then the humanist came out, and I felt it would not be right to tie such a horrific pic to the victims memory.

However, I did want to memorialize them in the one way I knew best how to do. With a Lost Sole Dedication. Because after all, running shoes have become the symbol of the marathon. So it just seems to be appropriate to dedicate a shoe.

My solution was this. Just a few days earlier I had found Lost Sole #465. Not the same day as the bombings, or was it even found near the bombings, but it did have a connection to the first victim they announced, Martin Richard. He was only 8 years old, probably the same age of the boy to whom Lost Sole #465 belonged to.

I decided to invoke my artistic license and make Lost Sole #465 the dedication shoe.

My heart beats a little different every time I see another image of a victim, or read a recount of what happened to individual victims. I just cannot imagine the pain and hardship they, and their families have been going through. How could anyone ever really console them. How is it, this goes on all over the world, every day?!

Another thing that rocks me to my core is to think these people’s lives were snuffed out and other’s were ruined while they were in the middle of celebrating life. So many of the people running and spectating at that point were doing it for charities and personal achievement. The race was honoring the victims of Sandy Hook who were taken in senseless violence.

Plus, now that I have a 3 year-old daughter, events like this really hit home. How do parents explain evil in this world to their young child? Nora did ask a question while we were watching the news, “What is a bomb?”. I just sort of glossed over it with a vague answer, then distracted her from the thought and made a decision to not expose her to the coverage of it.

I do like the explanation that comedian Patton Oswalt stated on his Facebook page about evil in the world. Especially the end of his statement… “But the vast majority stands against that darkness and, like white blood cells attacking a virus, they dilute and weaken and eventually wash away the evil doers and, more importantly, the damage they wreak. This is beyond religion or creed or nation. We would not be here if humanity were inherently evil. We’d have eaten ourselves alive long ago.”

Here are links to other Lost Soles referenced in this entry.
›› Link to shoe image that sparked this tribute **WARNING: GRAPHIC IMAGE**
›› Link to a solo shoe photographed in Boston the day after, but several blocks away from the bombing site.

Footnote: Prior to hitting the “publish” button, news of the explosion at a fertilizer plant in West, Texas was being announced. At least 15 people died and 150 more were wounded, with numbers expected to rise. People described it felt like a nuclear bomb as it registered a 2.1 on the Richter Scale. It leveled many buildings, some as far away as 7 blocks. It is hard to imagine all the heartache going on throughout our country right now.

These peoples lives were worth no less than those in Boston, but I am sure will not get the same attention in the media. I understand the Boston bombing deaths get more interest, which brings more ratings and viewers, eventually leading to more revenue for networks and media outlets. There is more drama in it. It plays out more like a Hollywood movie than the West, Texas explosion. The West, Texas will probably always be a footnote in history when people talk about events that happened on April of 2013, apologetically, just like they are in this entry. I have a feeling the world lost a lot of the “vast majority that stands against that darkness,” today. And it greatly saddens Sharon and I.

To end this entry on an uplifting note if possible, take a look at the video of the National Anthem being song at the Boston Bruins game after the tragedy. We do outnumber the bad still, and there is plenty of us good people in this world.