Feet found in shoes washed up in Washington

This is one of my greatest fears, that I will walk up to a shoe to photograph it, and there will be a foot still in it!! I guess there could have been as I did not look in them for feet. I came across this article in Outside Magazine and I just had to repost it here. Takes Lost Soles to a whole new level! I am going to write the editor a note about my Lost Soles and see if it makes it into the magazine. 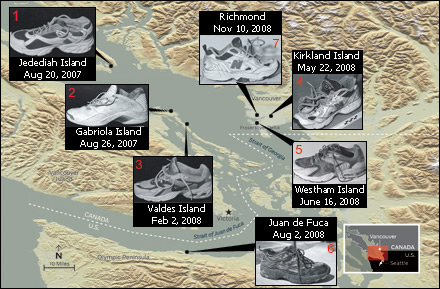 Something strange is happening in the coastal waters near Vancouver, B.C. Detached human feet, seven of ’em, neatly wrapped in running shoes have been found washed up on beaches or floating next to piers. The Mounties aren’t talking, but locals have plenty of theories. Let’s just hope they’re wrong about the flesh-eating lobsters and the rural loner with all the knives.

When feet started washing up in the dark, misty Pacific Northwest, it wasn’t hard to imagine the worst. The Reebok Ripper? Sure, why not?

And a Child Shall Lead Them
When you’re dealing with a tale of intrigue and suspicion in which nothing wants to be what it seems, the best place to start is at the beginning, before everything about the Mystery of the Feet got complicated. Before the dogged reporter and her theory of the Smiley Face Killers. Before the funeral feast of the submerged pig and the ravenous lobsters. And way before my afternoon with a knife-wielding man named Mountain Mike. Before all this, there is only the bucolic image of a little girl on a beach, looking for shells.

It’s August 20, 2007. The girl and her family are on a sailing trip in British Columbia. They toss anchor at uninhabited Jedediah Island, 50 miles northwest of Vancouver. It’s high summer, but the day is moody with drizzle, the cedars dark and foreboding above the pretty curl of cove.

The girl finds four sneakers on the sand. She lines them up, chooses one. It’s a Campus-brand shoe, a righty, white with blue mesh, size 12. She unties the laces, tugging at a sandy sock within.

And, right then, out plops the Start of Everything. Because inside the sock is a human foot. Over the next 15 months, six more feet, also clad in socks and sneakers, will wash ashore at six different places on the puzzle of islands in the Georgia Strait, between Vancouver and Vancouver Island, and in the nearby Fraser River delta.

At first the feet are all men’s feet, all right feet. Then a woman’s foot appears. Then a left foot. Four of the feet match: one pair of women’s feet, one pair of men’s. That’s seven feet, bow-tied in seaweed, that were once attached to a total of five bodies” bodies that don’t turn up.

The media arrive by helicopter and boat and do what the media do best: go apeshit. Reporters deliver fevered sound bites and write punny headlines (“Investigators Seek Leg-Up in Mystery Feet Case”), and for a few news cycles in early 2008, the whole world widens its eyes and scratches its head. Even the United News of Bangladesh clucks at the odd and tragic goings-on up there in British Columbia.

In Vancouver, at the HQ of the Royal Canadian Mounted Police, the authorities know little and say less, and they do it in that grumpy, pinch-lipped way that makes people wonder what they aren’t being told. In November 2008, Corporal Annie Linteau, a Mountie spokeswoman, tells me over the phone that they aren’t even close to coming up with an explanation. But that, she says, is mainly because there’s no reason to think anything fishy is going on.

Seriously? Yes, Linteau says, pointing out that there were no saw marks on the bones, no evidence of foul play. Without that, what do seven feet amount to, really, other than ghoulish serendipity?

By the time I head out from New York for a personal look-see, in early 2009, detectives haven’t solved the mystery, but they haven’t given up. The Major Crimes Unit is trying to put names to the feet by tracking down DNA from relatives of 57 high-probability men on B.C.’s missing-persons rolls. (At press time, only one foot, the first, had been identified: It belonged to a missing man whom the authorities won’t name, in deference to his family.) But even this gumshoe work might not crack the case. As Corporal Linteau tells me when we meet in person” inside a windowless briefing room, where she flips through pictures of empty shoes set against rulers, like grim flash cards” the search is limited to people known to be unaccounted for.

And so, as I head for the water-licked fringes of Greater Vancouver, the mystery is still as open-ended as a drinking straw.

Tabloid Juiciness 1, Canadian Coolheadedness 0
One foot on a beach might’ve only made a splash in the local Alberni Valley Times. But six days after the first foot was found, on a Sunday afternoon in late August 2007, Vancouver couple George Baugh and his wife, Michele Cris, went hiking on Gabriola Island, about 40 miles south of Jedediah Island and across the Georgia Strait from Vancouver.

“We were on a trail that obviously hadn’t been used for a while” ferns were all grown up over it,” George is telling me. It’s February, and we’re sitting inside a cafe in downtown Vancouver. He says he and Michele were walking single file, Michele in the lead, when suddenly she stopped and said, “Look, there’s a foot.”

This is why I especially wanted to talk to George and Mice
hle. It’s not just that they found a foot (though that helps); it’s that, in all the newspaper accounts, the couple seemed so sensible. And that’s what a story about severed feet cries out for, isn’t it? Grounding? Credibility?

George is a slim, 52-year-old wine importer whose entire presence whispers Canadian civility. He’s wearing a forest-green turtleneck and a tight, gray-flecked Caesar haircut. When Michele came across the shoe, a Reebok runner sitting a couple of yards off the trail at the base of a madrona tree, they both kept walking” at first. It was just a sneaker in the woods, after all; maybe it had been carried up from the beach by a dog. But then they went back, because something bothered them about that shoe. It looked so…full.

George poked it with Michele’s hiking stick. He saw “something white, not dried out at all, sort of greasy-looking” nesting inside a fringe of frayed white sock. He called 911: no reception. Michele suggested that they knock on the doors of homes near the path” homes that just happened to be sitting on an isolated country lane called Stalker Road.

George: “I said, ‘No, we’re not going to knock at any houses. These guys could be involved.”

Now, here in the cafe, he’s talking, with characteristic thoughtfulness, about how humans crave patterns. It’s how we make sense of things, he says. That day on Gabriola, as they sat waiting for the Mounties to arrive, he pulled a newspaper out of a rural mailbox. “Then we read about the Jedediah foot, which was the first one,” he says.” I thought, I think we’ve found the other foot! We’ve solved the mystery.”

But the mystery was just getting started. In February 2008, workers clearing brush on Valdes Island, just south of Gabriola, found Foot Number Three. It was another righty! Another runner! Another size 12! (Well, actually, size 11. But…close enough!)

And this…well, this was when things sorta went nuts.

Read the rest of the article by clicking here >>