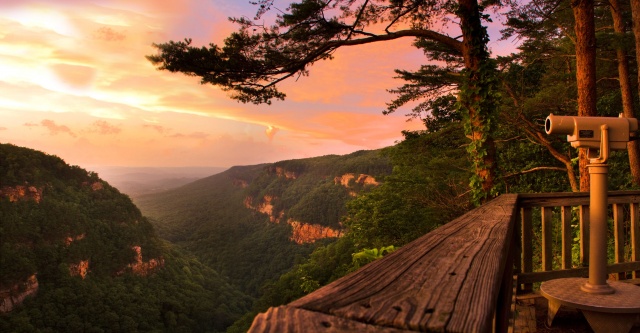 A view of Cloudland Canyon during sunset

I must first say, I am so excited to be on another road adventure! There was a point I didn’t think we were going to find an RV that we could both afford and want, which meant my wanderlust was not going to ever be satisfied. But along came the “Ark” :)

We left either late wed. night or early thursday morning depending on how you view 1 a.m. And if you travel with young ones you know why we left at such a crazy hour. It was a 6 hour drive to Cloudland Canyon, so we arrived right around 8 a.m. It was on the huge hill leading up the mountain to the park that we really appreciated a small RV because I am not sure the Cruisemaster towing the Jeep would have made it up there.

We chose to stay in the East Rim campground and settled for a great spot right next to the well built playground. Nora has slowly been getting over her anxiety over new people and especially other kids. In fact at one point she was right in the middle of 4 kids playing with them. I guess everything is just phases they go through.

We did squeeze in a hike with the dogs to see the canyon after we set up camp. The canyon was incredible, something I cannot believe I had not visited before. It was just a few miles off highway 59, which we have travelled on several times. It was lush and green with large steep walls with exposed orange rock cliffs and outcroppings. Had it not been covered with vegetation it would have rivaled many of the canyons the deserts of the southwest. The sound of tumbling and falling water filled the air but due to the heavy tree cover it could only be heard and not seen. The only way to see the water below was a strenuous hike down into the canyon through a series of catwalks, stairs and bridges.

And while Sharon and her napped I went to explore a bit and play some disc golf. I for sure got my workout that day as the disc golf course was located at the top of a hilly windy road that steeply climbed for a few miles. The course itself was up and down forcing me to expend a lot more energy even yet. So by the time I finished hurrying through the course I was spent.

The course had 18 holes that were all pretty open. But will the rising and falling topography made them tougher than they looked. It was very well maintained and constructed. Cement pads and good markers always make for a nice course to play. The last few holes were tucked in the woods and were quite tight. The main issue I have with the course is one it cannot help, but for me is almost a deal breaker. Poison Ivy! It was everywhere on the edges of the course and made sending a disc into it, pretty much a lost disc. Luckily I did not have that happen as I was overly cautious about it as poison ivy is my arch-enemy. Hence I did not shoot the best score I could have. 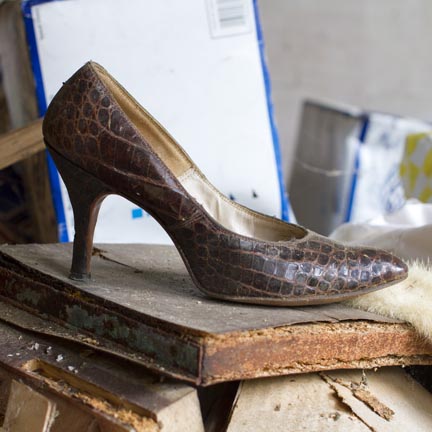 Lost Sole #420, (some of my friend's favorite number :) This sole was more abandoned than lost, it was found in a broken down home that was left to rot and fall after being severely damaged by a tornado a few months earlier. It was discovered as I was biking on a highway just outside the park, headed to grab some ketchup. It was to be a short jaunt that became more of a trek, and this served as a good momento.

It was so nice to be back out camping again. That night we cooked veggie burgers on the grill and they were the best I have ever had. I was starving. Nora had fun drawing on the pavement with her chalk and playing with the “neighborhood” kids. We slept really well fueled by the exhaustion of the exercise and lack of sleep.

The next day we woke to a beautiful day, perfect for a hike, and our trail that we chose to conquer that day was the hike down into the canyon to the falls. We strapped Nora to my back with the Ergo and embarked, this was going to be Nora’s first official hike. Going down was incredible, it was so green and alive with birds and animals. The background sound of the water cascading over the rocks grew louder as we descended down the many series of stairs, which were well constructed with a mix of wood structure and metal steps for traction.

The waterfalls looked roughly the same and were about a half mile apart. I guess they have had incidents over the years and if someone does get into trouble down there, extraction would be difficult at best. So they have a new exploration off the walkways policy. Swimming and climbing on rocks was prohibited. Which was fine with us as it was cool down there and not much sun.

Eyeing the climb back to the top was daunting. The steps and bridges we climbed down looked to go on forever above us disappearing into the forest cover and out of sight. It was time for the real fun of the hike to begin.

Overall I felt we ascended up the maze of stairs fairly well. Only occasionally stopping. The feeling of overcoming the hike was great and made us quite hungry. We got back to the van, showered up and broke down camp. Time to head to Cincinnati. But first we had a small detour to make for lunch in Chatanooga :)
[geo_mashup_map]