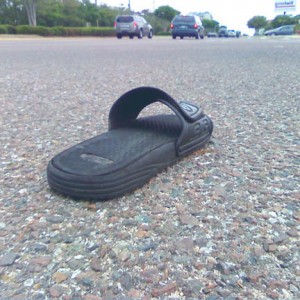 Lost Sole #291 is dedicated to Frank Barrett whose life was snuffed out violently after living a peacful life for over 86 years. I found this Lost Sole on Hwy 98 in Destin while driving back from the beach to Wayne and Alice's house immediately after hearing about the tragedy. I wish I had my good camera with me to give the proper justice to this image, but it is not about that. It is about capturing a memorial to pay tribute to a life that has been lost. Our prayers and sympathies are with the Barrett family and all those affected by this senseless act of violence.

This past Saturday Sharon and I went down to Destin to visit with our great friends, Alice and Wayne. I have mentioned them many times in this blog and in our books. They have become our extended family. Alice is like a sister to Sharon. We always have a good time with them and they have helped us through some rough times, they take great care of us.

Well a tragedy hit their family this past weekend. While playing volleyball at Fort Walton Beach, I came off the court to glance at my phone which was buried and therefore I was unable to hear the 12 missed calls that showed on the screen. All from Sharon. Something was very wrong. My heart stopped and I felt like I was going to throw up. I called her back immediately. Thinking the worst case, that something is wrong with Nora, only to find out it was something totally different but none the less tragic. She told me Wayne’s father had been murdered that day. Shot in his own home by a deranged neighbor. I didn’t know how to react because on one hand I was relieved it was not Nora, but felt such sadness for Wayne. I was just shocked. Sharon was in the car when I talked to her with Alice driving home from a class they were attending in Panama City. They still had a short drive to get Alice home to be with Wayne. My heart ached for the pain they must be going through and what they will have to endure over the time to come. Wayne and Alice were there with us through all of the Noah tragedy. Alice was literally in the room with us when we delivered Noah, holding Sharon’s hand. She helped Sharon and I at a time of need more than she will ever know.

Later that day I got a little more about what happened. Wayne’s father lived in Wetumpka, AL. in a quiet neighborhood except for that day. Apparently two neighbors were disputing a property line, the difference of around a foot. The one neighbor, whose name I do not know yet, was a retired military guy who just recently moved in with the help of Wayne’s father and was the one who was disputing the line the most and made a big deal out of it. Well Wayne’s father tried to help the situation out and calm him down by mediating it a bit. But I guess Wayne’s father sided with the other neighbor, which seemed to have ignited a rage in the ex-military guy as he left and went and got his shotgun. He gunned down the neighbor and his wife then went over to Wayne’s father’s house and gunned him down in cold blood as well through the door.

I did not personally know Wayne’s father but from what I hear, and if he is anything like his son Wayne, he was a good and gentle man. Very well-liked around the community. Never harmed anybody. It is so hard to fathom such a senseless act of violence was committed to someone like him. I have been reading about stuff like this on CNN an always wondered if a tragedy like this would ever hit close to home. I write this with a very heavy heart for a man who had his life after 86 years snuffed out in such a violent manner.

Wayne’s mother had passed several years ago and I like to believe they are re-united again and his father is in a good place. I just hate that Wayne, Alice and the Barrett family is going to have to live on with this event always in their minds, it will forever shape the way they live. Our sympathies and prayers go out to all who are affected by this senseless and inconceivable act.

And I must preface this article i have copied here as it has some facts wrong. Frank was NOT intervening, he was sitting on his porch like he always does when he saw the shooting happen and went into the house and called 911. Mr. Jones went to Frank’s house and shot him through the front door. Frank passed away while he was still on the phone with 911.

And as of this day, Mr. Jones’ family has yet to contact the Barretts with any sort of apology or condolences. 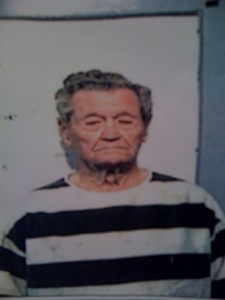 Why did you shoot Mr. Barrett? He looked at me square in the face and said, Because he was the nosiest S.O.B. I've ever seen.

An argument between Paul Norman Jones, 80, and his neighbors quickly got out of hand–reportedly due to a long standing dispute over a wooden fence.

“The fence has been here as long as we’ve been here, and [Jones] just bought that house 2 years ago and insisted that [his neighbor’s] fence was on his property line,” explained Paula James of Wetumpka.

What happened next shocked the city.

Jones reportedly opened fire on his neighbors, Gerald and Linda Ingram. Witnesses say Frank Barrett, 85, intervened at some point during the argument.

Right after shooting the couple, Jones reportedly walked over to Barrett’s home and shot him point blank in his doorway.

Travis James ran over to help.

“There wasn’t much I could do, other than hold his hand and tell him to hang on, and that help was on the way. And that he wasn’t by himself,” Travis explained.

“[Jones] was retreating to his residence at the time officers arrived on the scene,” said Deputy Chief Anthony Crenshaw of the Wetumpka Police Department.

Barrett died soon after. Meanwhile, authorities made their arrest and neighbors confronted the gunman.

“I said [to Paul Jones], ‘Why did you shoot Mr. Barrett?’ He looked at me square in the face and said, ‘Because he was the nosiest S.O.B. I’ve ever seen,'” Paula James explained.