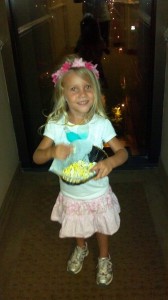 Nora enjoying her popcorn on the top floor of the Grand Hotel.

Since Nora was first able to walk we have had a special thing we share together. She calls it going to the elevator.

Our house sits in a historic downtown area and just down the street from us is the Crown Plaza Hotel, a.k.a. “The Grand” to locals. It was once a train depot back in the late 1800s early 1900s. So it is pretty large and has hallways and large lobby areas in which to walk around. A perfect place to let a child burn off some energy on a cold or rainy evening. Which was the main reason for the visits.

I wanted to write down a typical trip down there because it is something special to me, nothing really exciting, just something that me as a dad share with my daughter. Which I know, will one day, come to an end and I want to remember the details. The whole thing became a pattern. We did pretty much the same thing every time to the point of becoming a ritual.

It usually starts with Nora asking to go to the “elevator.” Many times it is after a long day and I am tired so I am a bit reluctant at first but I know how much she likes it, and I do as well. So I get her ready and throw her on my shoulders as we begin our 3 block walk down. Depending on the time of year, there might be yucca plants in bloom in which she loves to eat the petals with me. Other times she just wants me to pick her a flower. She is very into her flowers. Over the years she has picked up quite a bit of knowledge on which flower is which. She is a little partial to roses already. But she knows her vincas, oleanders, black eyed susans, daisies, marigolds, azaleas, hydrangeas and more. Her little brain soaks it up.

The good thing is that usually the hotel is very quiet with very few people milling about. So I feel alright about letting her run the lobbies and halls.

Originally I would sneak into the hotel through a side door and go up a set of hidden stairs to the second floor to avoid being seen and having someone ask me if I were staying there. We could make it all the way in and out of the building without front desk even knowing we were there. I don’t think they would really care anyway, but it added an air of secrecy to it all. Making it more fun for us.

That stopped however once Nora discovered the front revolving door. And had to use it to enter and leave because what child does not like a revolving door? At first she walked with me and now she likes to do it on her own. And the door was in plain view of the front desk so we always blow our cover.

Upon entering through that door for the first time, Nora could smell popcorn. Every kid knows that smell. It emanated from the hotel bar where kids are not allowed. But I do it so quickly and it is so dark, no one says a word. We now had a snack for the evening.

Even though we come in the revolving door, we still go up those hidden stairs to the second floor where the pool is located. Early on she could just make it up a few stairs on her hands and knees. But as time went on, she made it all the way to the top of them by herself, eventually running up them. If it is warm enough for the pool area to be open we go out there and sit on the edge with our feet in the water for a moment.

Then it is a dash down a hall to one of the main stairwells. This is where daddy gets his exercise. Placing her once again on my shoulders I make the ascent up to the 14th floor. The floors are labeled and we count the whole way to help Nora with her counting and numbers.

Once at the top floor Nora runs down the hall to a window where we look out onto the street where we live. It looks totally different from this viewpoint. The house is obscured by large oak trees but we can always see the Ark, our large white camper van, parked out on the street. She thinks that is so cool. We munched some more on the popcorn.

Now she makes her way to the elevators and pushes the down button. Another thing she could not do by herself at first, but now reaches it with ease. We play a game to see who could guess which elevator of the three would open. Nora wins most of the time. She then gets in and pushes button number 2, and down we go, munching popcorn as we go.

At the 2nd floor we get out and head to the other set of stairs to climb them in the same way. Again at the top we climb out the door, run down the hall a bit, and peer out the window. This window you cannot see the Ark but the busy highway was below. Car lights streaked around the turn below but all was silent up that high. It was like the view from a low flying airplane.

Again we take the elevator down and get off on the second floor. In the past we snuck across a walkway over the front desk to avoid being seen. But lately we go down a large open staircase that she refers to as the princess stairs. There are flowers prints on the carpet and she pretends she is picking flowers up for mommy, and instructs me to help. I try to be sly so people who might happen by will not think I am loony.

The Grand is a beautiful hotel in its architecture and decor, some furniture pieces look like they literally weigh a ton, and not sure they could even be removed short of removing the roof or a wall. The walls are adorned with historic images of Pensacola which always fascinate me to look at.

We run all the way down to the end by the banquet halls and back up. Stopping at the fountain so she can throw in a coin and make a wish. Recently it has been drained for repainting which has taken weeks so far. Which she is none too happy about.

Just around the corner from the fountain is a library room. It is wall to wall books. The bookshelves go from the floor to the ceiling with all sorts of books. We usually grab the one about our solar system and planets. She loves to hear about the planets and their different colors. Another one we look at is the book about big buildings. We talk about climbing those stairs and looking out the windows of the tallest sky scrapers.

Eventually I have to coax her to head home. Bribing her with the chance to pick some flowers on the way home usually works. We exit out a glass covered hallway which at one point when the place was a train depot, was an alley between buildings. Now it is a beautiful atrium with lush potted plants.

I think I have a few more years of this ritual because nora still loves it. I know I repeat myself with this a lot, but they grow up so fast, and she is getting so big, so quickly. My little girl will be gone soon and hopefully a sweet girl who still loves to do stuff with her daddy will take her place. Maybe someday I will still be around when she is old enough to be able go into that bar legally and have a drink with her old dad where they used to run around when she was a tiny girl.