Las Cruces, New Mexico: Everyone in the desert is running from something. 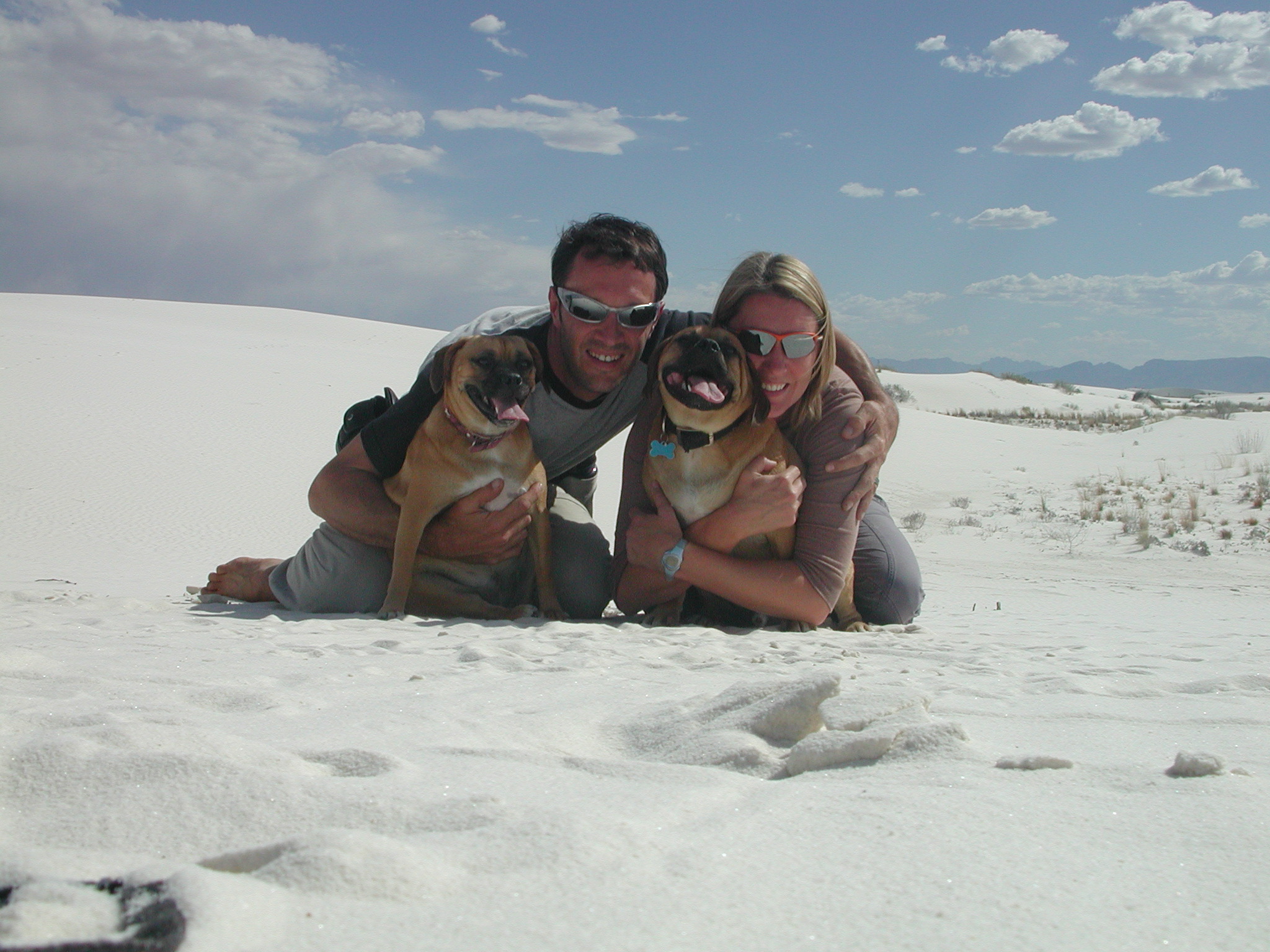 Where to begin? I guess from the first arrival into the Coachlight Bob’s Inn and RV Park. Upon first site we were a little nervous to say the lest. It looked like a glorified truck stop with a lot of transient people staying there. Not a place we normally stay at. We parked and headed into the office as we had no choice but stay at least the first night, and we wanted to see Las Cruces and White Sands NP which meant a total of two nights. We figured we could just do what we have to do. A very “jolly” heavy-set man greeted us from behind the desk. He did play with us, he told us “Sorry we are full, no room at the Inn”. We were torn, was it a blessing or should we be angry? But before we figured it out, he told us he was just kidding. He must have seen the blank stare of confusion on our faces, because he apologized quickly. He was a really nice guy, helped us get acquainted with the area and find a Thai Restaurant for dinner, with a brewpub for afterwards :)

That first night we just stayed at the coach, not daring to venture out and leave the coach alone. The poor dogs finally found a little patch of grass in which to do their business as it had been nothing but rocks, pavement and prickly plants since Balmorhea. We did meet a very interesting fellow known just as Frog. He was a short stocky guy, probably around 45, scrappy beard and hair, a true biker. He had a trike he had built from cutting a blue 67’ Mustang in half and fusing it with the front of a motorcycle. It is something you must see to experience. Frog was very friendly and likable. He made us feel every comfortable with the RV Park. He was originally from Maine but has been livin’ in the desert since 73’. He invited us for a beer but we never got to take him up on his offer.

The next morning we got up very early to start a very adventurous day with the dogs along for the ride. The first stop, White Sands National Park. Well it was going to be except I let us run out of gas almost so we passed by it to go to a gas station which happened to be still 20 miles down the road! So we decided we would hit it on the way back, somewhat because the dogs were antsy to get it out and we heard from a sketchy source (Kevin) dogs were not allowed in the dunes. Even though we did not run out of gas, in hindsight leaving the car running with air on so I could photograph a shoe was not “efficient.”

So on to Cloudcroft. Cloudcroft is a small ski town in the Sacremento Mountains outside of Alamagorda at 9000’. It was a stark contrast from the desert, it was cloudy, cool and green. We ate lunch at Dan’s cafe, which we recommend. The hike we decided upon was the Osho Trail. A 25 mile loop just outside town in the Lincoln National Forest. It was a nice hike, a big climb in the beginning but overall just slightly rolling. We had a great view of the valley below with the White Sands dune field glistening in the desert sun. Jack and Jinjer were in heaven, they love trails like this. Wooded and a smooth dirt surface.

Now it was back to White Sands NP. We figured we were going to just look around at the visitor center until we found out we could bring dogs into the park! Like I said our source (Kevin) is somewhat unreliable. The puggles had a blast, running and playing in the dunes, we even broke the rules and let them run off leash. I believe Jinny kept looking for the Gulf of Mexico because in the dunes it looked just like being in Navarre Beach Florida. She eventually gave up and just wrestled with her brother for a bit. They wore themselves out. I managed to get some great pics there. Sharon and I too had fun and were getting worn out.

So it was back to The Coachlight in Las Cruces. We took showers, fed the dogs and headed out to dinner. We were going to the Thai restaurant Mix. Before we got there we took directions given to us by our shaky source (Kevin) and they proved to be “challenging”. After photographing a shoe, we found the restaurant but upon looking at the menu, we decided there was no way we were paying $16 for a curry dish! Luckily for us the Taste of India restaurant was right next door, it was fate we think, we believe we were meant to go in there.

The first take on it was the food smelled great and it was a nice place. The server we got, was so helpful and took a lot of pride in the place because as we came to find out later his father was the owner and he was the manager. The food lived up to its smell. It was wonderful, we had a sample platter of sorts with lots of different things to try. At the end of dinner he learned we were heading to Arizona and apparently the food coloring they use is only available in Arizona and the company does not ship. So he asked us to do a favor for them and grab some for them and bring it back. One problem though. We were not coming back :) So we told them we would buy it and ship it back to them with the receipt and they mail us a check for reimbursement. They were excited they were not going to have to do the drive themselves. And when we went to pay our bill we were surprised they paid for our dinner! So we now have a mission to pick up some coloring in Arizona and ship it back.

We were ready by now for a good beer. On a tip from our absent-minded source (Kevin) we were to go to the High Desert Brewing Co. for a pint of their on-site brewed beer. Not to our surprise our dumb@$$ source (Kevin) gave us bunk directions but we eventually found it. This was a pub Kevin used to frequent when he attended New Mexico State years ago, and one I remembered I had been to when I visited him (which is a fun story in itself)

Note to all: When hiking, biking or doing anything athletic with Kevin have a camera ALWAYS ready! If you ever see us and have not heard the “Grab the Rope” story, ask me to tell you, it is a classic!

Back to the main story…We sat next to two older guys who were cracking us up with their banter. One was a big Israeli guy who is an art dealer from what we could discern and had a great Jewish sense of humor. The other a straight-laced cowboy type who has been around from his days as a trucker, and now a financial planner. They had been friends for a long time, they reminded us of the odd couple. The cowboy gave us a great quote. “Everyone in the desert is running from something, even if it is just the voices in their own heads.” The big guy called us “Semi-quasi flower children” upon hearing our story. It was a great time but we were exhausted and needed to get back to the puggles in the coach. What a DAY! There was more detail but my fingers are tired.

The following day before we departed we went to the market downtown and on a tip from a vender we first HAD to get some of Suzy’s asparagus before they were gone. So I found Suzy’s stand and got bunch. We got organic bread, and a hat for Nanny made from 30 Walmart plastic bags, what a great way to reuse them!

We got back, said bye to Frog and promised we would upload the photos of him and his “trike” to Walmart in town so he could get copies printed. On our way out of town we stopped at the ST. Clair vineyard and winery to sample wine. They had a wonderful port that was no as sweet as most, so gooood! But too expensive :( We did get a Syrah and a Raspberry Champagne. Finally we were headed towards Arizona. We really enjoyed our time in New Mexico and met so many friendly people and saw so many cool things, we would love to return again. We must thank our long-distance tour guide Kevin, for being our “source”.
[geo_mashup_map]