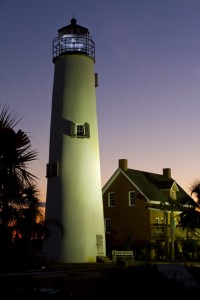 The St. George lighthouse was relocated from the West End of the Island where it had collapsed from hurricanes in 2005. The locals gathered all of the bricks, and using the original plans rebuilt the lighthouse where it now stands in the center of the island activity.

As the photographer for Snowbirds Gulf Coast Magazine, I get to travel up and down the Gulf Coast on assignment to capture photos of the area and of featured interviewees. This past week I was fortunate to have a shoot scheduled on the Beautiful and secluded St. George Island located in the Apalachicola region of the Florida Panhandle.

The drive down there was not so fun due to the cries of a 16 month old baby who was tired of being strapped into a seat for 3 hours. Nora eventually fell asleep for us thank goodness. Because listening and ignoring the cries of Mommy, Mommy, Daddy, Daddy, has to be one of the toughest things a parent has to endure.

Driving there leaves you feeling like you are traveling to a place lost in time, true to the nickname of this part of Florida known as the forgotten coast. This area prides themselves on being referred to as “Old Florida”. Back before high-rises dominated the beaches and tourists still ate and shopped at local businesses, owned and operated by families who have lived there for generations.

It takes 2 long bridges to get out to the island from the mainland. Further adding to the remoteness of it all.

St. George Island is not very big, a barrier island just 28 miles long and 2 miles wide at its widest point. However it has three distinct regions on it. The State park on the east end occupies 9 miles, a public business area, and a private, gated and highly-exclusive community known as The St. George Plantation, complete with its own airstrip. There are some of the most expensive homes on the entire Gulf of Mexico located here and second homes to many celebrities such as Hank Williams Jr., Faith Hill and Tim McGraw, and others. 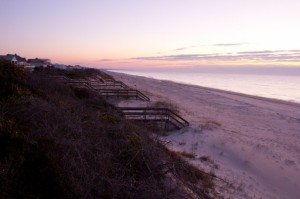 View from atop one of the several walkways that traverse over the dunes at the east end of the island in St. George Plantation

The island has no high-rises, the tallest structure on the island is the lighthouse. Most of the homes are rentals and the permanent population numbers around 250. There is just a handful of small shops and restaurants. The island is composed of mostly sand dunes with sea oats and pine trees making for an awesome escape from the outside world. The island has its own slower pace that is easy to fall into. The best way to get around would be by utilizing the several miles of paved bike path that wind across the island however it was too cold for us to bike (we are Floridians now and whimps when it comes to cold :)

I got a quick tour of The Plantation with one of the residents who showed me the highlights and even a secret spot with 3 freshwater ponds that are home to several alligator. Unfortunately they were hibernating at this time of year.

Our accommodations on the island was a rustic stilt home, yet with modern amenities affectionately called Fisherman’s Prescription. Complete with wood paneling, and even wooden ceilings, it was true to its name. Located on a small inlet of water and had a nice dock leading off the back yard it was perfect to fish from or launch a boat to go explore the surrounding coastline. I am sure the banks are swarming with trout and redfish in the warmer months. We loved the place and plan on going back to spend more time when it is warmer as this area is all about the outdoors.

During our brief stay of 2 days, 2 nights we ate at Harry A’s and Blue Parrot. Both had a great atmospheres. Harry A’s is a great beach bar with a large courtyard for live music and dancing and sure to be a lot of fun during the summer months. Worth noting is that they boast a very large selections of beers :) The Blue Parrot is more laid back. Located directly on the beach on the Gulf Side it begs you to just sit, and enjoy the scenery while drinking a margarita. I bet a sunset would be beautiful there on their outdoor patio.

The food choices were just about the same, with the Blue Parrot perhaps being a little more upscale, but basically local seafood is the basis for each menu. We only had sandwiches at both places, there were about average but according to locals it is the dinner entrees where they really excel. 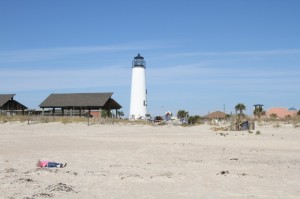 Can you see the little munchkin lying on the beach? She loves to get sandy!

We only ventures off the island once to eat breakfast and that was with my guide/friend Rusty and his wife. If they were any indication as to the friendliness of the locals that live there, it would be a great place to call home. They took us to a small restaurant called “The Hut”. I highly recommend the french toast.

The spot we frequented the most other than the beaches was the Lighthouse park playground. They did a nice job building a great spot for younger kids to play and have fun. Nora thoroughly enjoyed all the fast slides.

Speaking of the beaches, St. George has miles and miles of great beach. I imagine even in the summer you would have no problem finding a secluded spot to set up. The sand was darker than Pensacola and the water not as clear, but they were still beautiful in their own right. The dunes were tall and perfect, covered in long sea oats swaying in the breeze.

One of the big selling points for us to come back is how dog-friendly the island is. Seems most rentals are pet-friendly and the beaches allow dogs in all areas as long as leashed. I am sure noone would care if you had them off-leash if they were obedient. Just make sure you CLEAN UP after your dogs. Do not ruin it for everyone.

Special thanks to Collins Vacation Rentals for the accommodations, Sea Oats Gallery for letting me shoot there, and to Rusty for taking me around the island and showing me some cool hidden places. We cannot wait to go back.