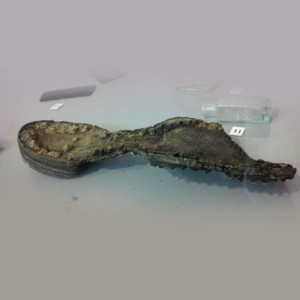 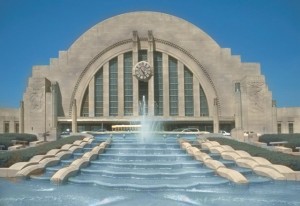 This is an ancient lost sole on display at the Cincinnati Museum of Natural History. This is most likely the oldest shoe in my collection. The photo of the outside of the museum complex was not taken by me as it was pouring rain that day so I did not take my camera out of the ark.

We had planned on visiting Kings Island with my friend Skippy and his girls but mother nature did not cooperate. It was stormy and rainy. So we made the decision to spend the day indoors at the Cincinnati Museum Complex.

Several years back the Cincinnati Museum of Natural History was moved to its present location of the Union Terminal which was the old train station. It is a very recognizable, towering structure that resembles the hall of justice from the superhero cartoons. It now houses 3 museums, the Natural History Museum, The Cincinnati History Museum and the Children’s Museum. We started at the children’s museum.

It is mostly a well done indoor playground. One any kid is sure to love. There was a make-believe grocery store with shopping carts and play products on the shelves. Nora shopped and got her groceries and Mom “checked” her out at the counter. There was also a house setup, car garage, vet’s office, post office and baby daycare area with toy babies to be cared for.

One section was full of building toys, from legos to large blocks, even a pretend rock quarry with foam rocks to haul around. What I thought would be the biggest hit with Nora turned to disaster, or at least seemed it was from the way Nora screamed and cried :) It was a large water area, where there were elevated water tubs with canals and little boats along with fountains and wind machines. As Nora was playing with a boat, a boy grabbed a fountain nozzle and tried to plug it up, resulting in a stream of water coming out hitting Nora in the face and chest. She was angry and upset, so it was time to move on.

The most impressive section to me was the indoor forest play area. It looked like trees and had ladders and steps leading up to swinging rope bridges and tunnels. But of course daddy had to go up with Nora and squeeze through a maze of tunnels and little rooms.

All the playing got us pretty hungry, and since we had seen pretty much the entire Children’s Museum we left for the cafeteria. They actually had good food with a vegetarian alternative of a garden burger and cucumber salad. Nora got her fill and actually went to sleep for us in the stroller. Now the adults could go see what they wanted.

First stop was to go to the Cincinnati History Museum and see the model recreations of old Cincinnati. It was pretty intricate and very interesting to see. Then the Natural History Museum where we explored the exhibits detailing the Ice Ages and how it affected the Ohio Valley. They had a recreated cavern that was pretty cool to walk through. While it is not as impressive as say the Smithsonian, it was pretty cool as it connected geological and natural events to the local area.

For the price it cannot be beat for a day of fun when it is gloomy outside. Mainly for kids but adults will find interesting exhibits and will enjoy the ambiance of the restored historic Union Terminal.