On our way home from Maryland, Sharon and I passed a gentlemen on the shoulder of I-65, outside of Montgomery, AL, pulling a shopping cart overflowing with items that can only be described as “stuff”. I mentioned to Sharon regarding our current situation that “it could always be worse” as I pointed to this poor fellow dragging his belongings in the searing southern U.S. heat. 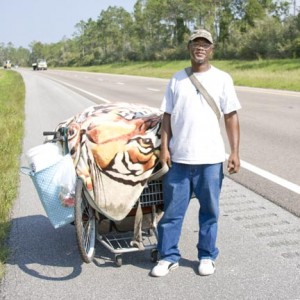 My mind continued to think about his plight as we drove. I started to wonder if he really is that bad off. How do I know his is not happy. Maybe this is his way to live life and who am I to judge him. As those deep thoughts gave way to more shallow thoughts, I began wondering if he is picking stuff up off the road. If that crazy pile of stuff on his cart was all lost items he found on the highway. And now the big question, did he have any Lost Soles in that cart? :)

Time went on and my mind let go of him. And those questions would just go unanswered. Or so I thought.

It was the following day that I had to drive to Mobile, AL, to pick up some political signs for a client when I saw that guy again! I was on I-10, a different highway than where we saw him before, but I was certain it was him. I immediatley pulled off to the side of the highway and got out and approached him.

I was hoping he was not a psycho. As I got closer I could see he was clean and had fairly nice clothes on.I spoke first, “Hey can I ask you a question?”

He politely answered with a “sure can.”

I then explained what I do and asked, “By any chance have you got any found shoes in your cart?”

“Not today” he said.

I was disappointed, but my curiousity was still piqued so I asked more questions.

I learned that he started out one day after hearing that there are enough plastic bottles on the roads in the U.S. to encircle the globe. He thought if there are that many plastic bottles out there, there must be a ton of cans also, and cans are worth money. So he found a way to fund a trek around the country. And once he got out on the road he started to find all sorts of stuff. Suitcases, bags, money, clothes, etc. He got adicted to searching for lost objects that are worth something, essentially treasure hunting in his words. He went on to tell me he gets harassed sometimes by Police but mostly to ensure his safety if he is heading into a dangerous situation.

I thanked him for his time and wished him good luck in his journey. However went I climbed into the van one last question came to my head that I had to ask. I grabbed my camera and went back to him.

One last question I said, “Those shoes you are wearing, where did you get those?”

“I found them in a suitcase one day” he proudly responded.

A ha I thought. “May I take your photo?”

“Yes, no problem” he said as he stood up straight and gave me a slight grin.