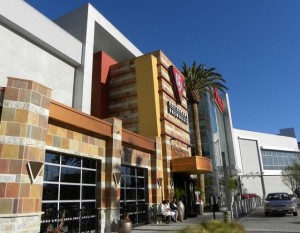 The outside of BJ's in Culver City, CA

Fresh of the plane in L.A. Kevin, Amy, Trish and I decided to stop for lunch at BJs Brewpub in, just a few miles from our hotel in Marina Del Ray.

The restaurant combined my 2 of my favorite things. Fish Tacos and on-site fresh brewed beer. First the tacos.

While I assume I could have asked for them to be grilled, the fish in the tacos comes fried. I prefer grilled, but pretty much only for the health factor.

These tacos were really good. The tortillas were very fresh and they were rolled tight with lettuce, tomatoes and with a side of a creamy avocado sauce. I would have to rate them a 8.5 out of ten.

The menu had many other great sounding choices as well. Something that stood out were the reasonable prices, especially for being in California and close to LAX and Marina Del Ray.

And even a better deal were the $3 pints of their draft beer. There is something about finding a deal that always makes something better. I am not sure if that is what added to the high rating I would give their beers or not.

The beers were really good, very smooth and drinkable. Nothing tasted over the top in the ones I sampled, those being the porter, the stout, the brown and the Irish red. I of course opted for the brown ale, for my full pint, aptly named, Brewnette. It really stood out as one of the top brown ales I have encountered, Full flavor, but not heavy. A beer you could end up drinking too many of before you knew it. A true session beer.