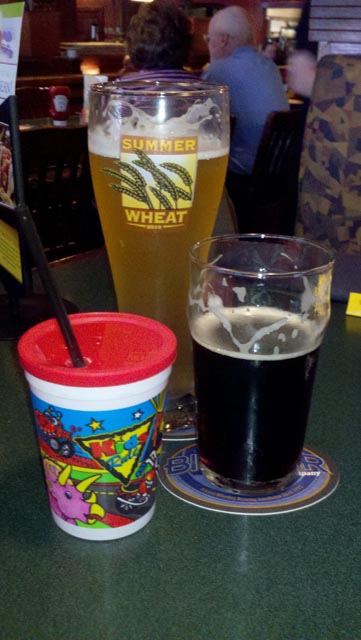 This brewpub is part of a big chain of brewpubs, which after finding that out, I was a little disappointed. But none the less, still excited to try some micro brews. The restaurant itself was well done from an aesthetic aspect. Very historic looking set in the downtown area of Chattanooga which is really evolving into a great place to walk around and take in the sites. Unfortunately time did not allow us that luxury.

The beers we got were the wheat and the brown ale. Both were about average in their categories. Neither really stood out, nor were they bad. The food however was a different story, well at least the fish tacos. We really enjoyed them and rank them up there pretty high as we have tried many a fish taco, including where they originated down in the Baja region. From the sound of the other items I have a feeling there is a lot other great choices for food.

As we ate I looked at the menu and noticed that there was another franchise down in Orlando, and we could not imagine that we had missed out on a brewpub in our visits there. So I got on my phone and reviewed past Orlando blog entires and sure enough, we had been to it. And we had tried the same beers and gave the same opinion of being average. But for some reason we did not like the food down there, guess we need to give it another try when we go to Orlando in the future, and see if it has improved to meet the standards of Chattanooga’s establishment.
[geo_mashup_map]