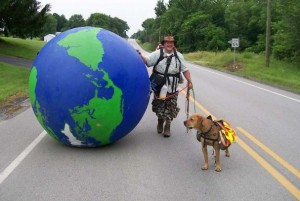 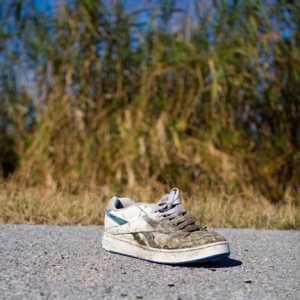 Many times I regret not stopping for something I find interesting, but this is one of my top regrets. I wish I had my own photo of the World Guy with Lost Sole #432 (pictured above) and personally met him.

On my way back from New Orleans I had decided to travel Scenic Highway 90 along the water. It is a gorgeous drive full of interesting sites including a restaurant named “We Never Close” with a “closed for the holidays” sign, a wild boar the size of a volkswagen dead on the side of the road, and of course a lost sole which I stopped to photograph.

But the most interesting site that caught my eye that day was a man walking his dog while rolling a 6 foot inflatable globe down this mostly uninhabited stretch of road.

As soon as I saw him my first instinct was to turn around and meet him and ask if he was on a mission of some sort. People just dont walk highways rolling a globe for no reason :)

However I was already running a little behind for a photo shoot in Ocean Springs, therefore I opted not to stop. A decision I regretted shortly there after and still to this day. Sometimes you just gotta break free of time constraints. I would love to have had a photo of him and that lost sole for my collection.

I was hungry though and had 15 minutes factored into my trip for a lunch break. It was there that I googled “rolling globe man” and that guy popped up first. He is known as the “World Guy” He was walking across the U.S. with his dog and globe to raise awareness for Diabetes. You can visit his site and read all about him. I noticed also on that site was a phone number. I thought, “what the Hell?” and dialed it to see if he would answer. He did.

I introduced myself and what my project is. I went on to ask him if he could do me a favor and photograph that shoe he was getting ready to come upon and send it to me. I figured if I could get a shot of him with the shoe, the next best thing was to have a photo from him of the shoe. He accepted my request and within a few hours I got an email from him with an image of that shoe. And then I got another from him of a different shoe, and another, and another. He began sending me all that he saw for a few days but has since stopped.

It could be I took too long to get this blog up about him, maybe he hasn’t seen anymore, or maybe since it is my thing he didn’t want to steal it from me so to speak. I am just grateful he participated in my project.

I still wish I had stopped and took the time to walk with him to that Lost Sole just down the road. I HATE REGRETS!

As far as his walk for Diabetes relating to me, I lost my father to complications of late on-set diabetes and my sister-in-law, as well as mother-in-law both are afflicted by the disease. Not sure what he will accomplish but I wish him luck on his endeavor. 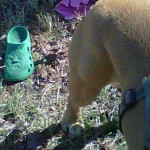 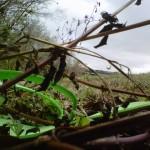 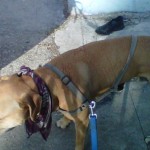 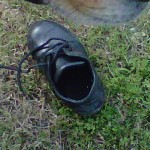 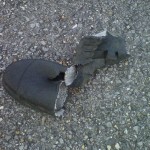 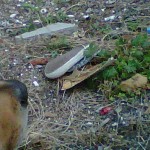 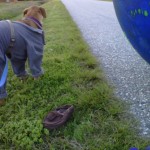 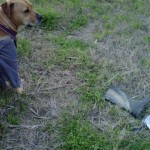