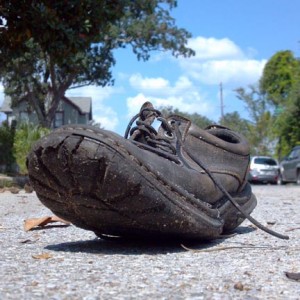 I found this shoe the day Candy passed away. It is not a particularly pretty shoe, but it has a lot of artistic character to it, and probably has a pretty good story to tell if it could as it looks well-traveled. And I bet Candy would find it pretty interesting. I hereby dedicate Lost Sole #451 to the memory of Cavendish (Candy) Angel Galyean.

I only lived in Charleston, West Virginia for around 3 years, but I managed to make strong friendships there that will most likely last a lifetime. Even though I don’t see or talk to them as much as I wish I could I still feel a strong bond with them. We all worked at a small educational company named Cambridge Educational. The atmosphere seemed to be one that fostered relationships between the coworkers. Or maybe it was that it was a special group of people that made up the Cambridge team. I like to believe it was the latter.

Among them were Jim (Captain), Greg (Big Daddy), Kyle (Cowboy), Charlotte, Scott, Mike, Julie, Denny, Amy, and Ladonna. Even Bob, who did not actually work at Cambridge but had an office in the building. We all had our own offices for the most part and it felt like a college dorm. We would socialize throughout the day, picking each others brains for the projects we were working on, and most of all developing friendships. At the time I felt I probably could have been more productive, but looking back. It was that open freedom that kept my creative juices flowing. Bouncing ideas of others and getting inspired kept me coming up with new designs and ideas. So instead of spending a week just trying to come up a fresh look for one or two cover designs, I got that many done in a day sometimes.

But I digress. The reason for this entry is to dedicate a Lost Sole I found to Cavendish (Candy) Angel Galyean, the sister of Charlotte, one of my good friends from those days in Charleston. I wish my memory was better so I could say more about Candy but the years have fogged my recall a bit. I do remember she was an extremely nice person and an active member of the community. She was one of the people that made sure to do something good for this world while she was in it. I remember she was very articulate and educated. She had a presence about her that made others around her want to be better. A person that this world sure needs more of. Farewell Candy, and thank you for the positive impression you have left behind for others to strive for.

So I will leave this entry with the obituary that was published in the Charleston Daily Mail Newspaper.

Cavendish Angel Galyean died September 21, 2012, at home with her family, at the age of 61. Candy was born in Huntington on October 21, 1950. She attended Kingswood Cranbrook School in Michigan and went on to earn her bachelor’s degree in sociology from Bryn Mawr College in Pennsylvania. She later obtained her master’s degree from the College of Graduate Studies at West Virginia State College.

Candy was a devoted daughter, sister, wife, mother, friend, student and companion. She was also a vibrant member of the Charleston community and a proud West Virginian. She dedicated much of her time to early childhood education and advancement of the arts in her home state. She particularly loved her extensive work with Read Aloud West Virginia and enjoyed volunteering at Sunrise Museum and the Clay Center, in addition to producing and writing for Cambridge Educational.

Candy delighted in sharing her ardent love of literature and film with her great friends in film and book clubs throughout her life. Her endless curiosity led her on many exotic and colorful adventures that are remembered fondly by the family and friends fortunate to experience them with her.

She was preceded in death by her parents, Doris and Harry Angel of Huntington; and her beloved husband of 15 years, Brent Galyean.

She is survived by her three daughters, Angela, Caroline and Mary Brent; her sister, Charlotte; her grandchildren, Horatio and Winifred; and her loving companion, Dave.

In lieu of flowers, donations may be made in Candy’s honor to Read Aloud West Virginia, www.readaloudwestvirginia.org.