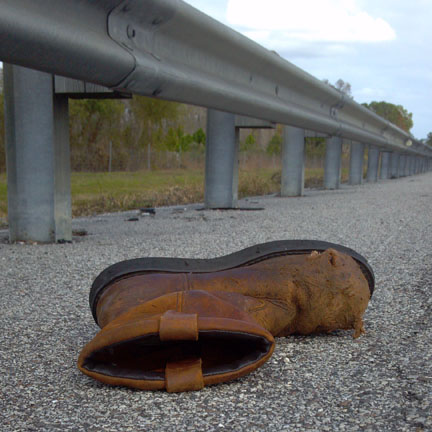 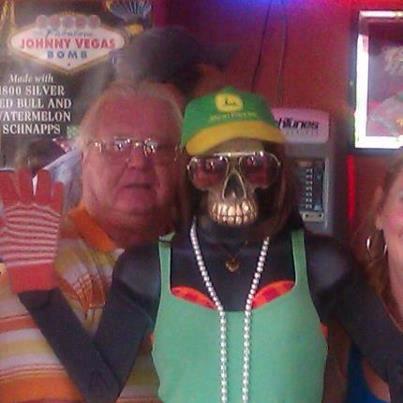 Fuzzy's lost sole was found on the day of his memorial service driving up to Orlando, the same path he was to drive the day he passed. I hereby dedicate Lost Sole #458 to the memory of Timothy Fuzzy Allen Deah. The picture above was of Fuzzy and his doll, Trixie, and the image says a thousand words

Having spent a lot of time in Port Charlotte/Punta Gorda Sharon and I have gotten to know many of the locals, mainly through her sister Rachie. One of the people we saw over and over again was a man we only knew as Fuzzy. His real name was Timothy Allen Deah.

He was jovial type person, who was always laughing smiling and cracking a joke of some sort. Usually off-color, but he was a good guy. He became one of Rachel and Donny’s best friends.

Our last visit to Port Charlotte Rachel told us a story from the cruise they had recently taken with Fuzzy. She told us of the great time they had a little bar called Senor Frogs. She described the night as the most fun she ever had at a bar, and coming from her, that means it must have been REALLY fun! And that night ended with Fuzzy helping carry her stuff back to the ship. They really came to love Fuzzy.

This trip Sharon’s parents were also down to visit and we were all out at Dean’s South of the Border where Rachie works. Fuzzy came over to our table to hang out with us for a bit and crack a few jokes. He was in a really good mood because the next day he was headed up to his daughter’s place outside Orlando to visit with her for the holidays as Thanksgiving had just passed.

The next day Rachie got a call from a colleague telling her that Fuzzy had passed during the night. It was a very sad phone call and brought heavy hearts to us all. We were probably the last people to hang with him, as he was on his way out the door to go home when he stopped at our table to chat.

Here is his obituary from the Pittsburgh Post Gazette

67, born December 12, 1944 left this world November 27, 2012. Tim was the devoted son of the late John and Coletta Deah; loving brother of Daniel (Frances), James (Theresa), John (Pamela); and a very special cousin to Dee Quinn Guckert, all of Pittsburgh; he leaves behind many nieces, nephews, great-nieces and great-nephews; Tim will be dearly missed by his children, Patricia Ann Deah-Santiago (Carlos) of Orlando and Jeffery Allen Deah of Punta Gorda. The love of Jeff’s Life, Lisa Ponsonby, shares in the family’s loss. He served in the U.S. Army during the Vietnam War and received the Purple Heart for his service to his country. Tim worked as a pattern maker making wooden patterns for the Pittsburgh steel mills. He became totally disabled in 1978 and made Florida his permanent home in 1980. His volunteer efforts include St. Charles Borromeo Bingo, Punta Gorda Little League, Charlotte Warriors, Charlotte High Boosters, Charlotte High School Athletics and he most recently served as Vice President of the Charlotte Fair Association.

His memorial service was a packed house, literally. He had made so many friends across the U.S. He touched a lot of lives and will be deeply missed. His zest for life though will always be remembered by all those whom he crossed paths with.