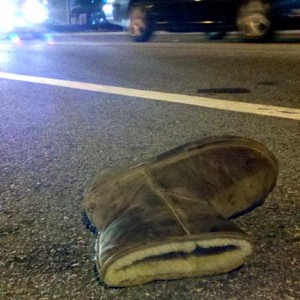 Lost Sole #426, found while participating in the "Santa Monica Road Rally", more like the daily rat race in L.A. And wouldn't you know it, a cop stopped and wanted to know what I was doing. Of all the crime going on in L.A., they take the time to stop and harass someone just taking a photo of a shoe.

Many times when some of the Gang gets together we like to reminisce about the old times, we retell stories from our past of adventures and sometimes-stupid exploits. We always ended up laughing until our faces hurt. But rarely do we all get together in one place, and even more rarely do we get to create new stories to be retold. This past August we got to do both.

It was Sean’s wedding and Skippy, Jason, Mark, Gary, Scooter, Dink, Trish, Kevin, Jeff and I all went out to L.A. for the wedding. The only true member not attending was Kramer. Getting all of us together like this, especially without any families. Except Kevin who brought his new bride out, as she had never met any of us yet and this was a great chance to meet everyone at one time.

Numerous funny stories happened that weekend, Jason getting a little tipsy and throwing up on the bus ride home from the wedding, Jason getting crapped on by a bird the next day, Mark getting so hung over he ended up in his infamous “fetal position”, Scooter doing a bang up job as the reverend while performing the wedding ceremony. We will forever recall the crazy people from L.A. and their outlandish behavior, as it was something I’ll never forget, nor will anyone else that was on that bus with them that day.

While those were all entertaining on their own merit. It was Skippy’s and I’s quest to find the Hell’s Kitchen restaurant and get a photo standing out front of it that causes me to smile every time I think of it.
The first night we got there all of us decided to go hit one of the local Marina Del Ray bars on the beach. But I couldn’t drink much as I had volunteered to go pick up Dink and Skippy from the airport. We went straight back to the hotel as everyone had already gotten back from the bar and it was getting late. We sat around for a bit but everyone was pretty wiped out from traveling. But not Skippy or I. I mean we were in L.A. and had no wives, no kids and no curfew. We were ready to explore. But where do we go at 1:30 a.m.?

Skippy was hungry as he never had dinner, and he wanted pizza. So we thought the best chance to find a pizza place open at this time of night would be on Sunset Blvd. in Hollywood.

Armed with a rental car a GPS we set out. Sunset Blvd. was actually quite easy to find. We enjoyed cruising through Bel Air and Beverly Hills. Seeing all the famous roads and landmarks.

It reminded me of when we were 16. We would buy root beers and a bag of Doritos and jump into Skippy’s little Honda Civic to drive around downtown Cincinnati late at night. Skippy had a police scanner at the time and we would listen for any action, fires or crimes, and go check them out.

And driving around town was always a blast. Skippy is quite the comedian and would always have me rolling. It was so much fun to feel so young and free.

I felt that way again with him as he does his impression of a large black woman as a fire dept. dispatchersending a truck to a four alarm fire on the corner of “Baskeweeben and Winesty” (AKA Basketweaving and Glen Este:). It was hilarious, and I really think he needs to record it. It wasn’t racist; it was just really funny and clever. The way he weaved all the little details and nuances into the skit was brilliant.

Once we did get to the main strip of bars we parked and headed out on foot. We strolled by the famous Whiskey a Go-Go, and Viper Room. They were both closed for the night but it was just cool to be where so many headline-making stories took place.

We stumbled upon a small pizza joint that had beer and was still serving! The pizza was by the slice and very large slices at that. Along the walls were autographed messages by numerous celebrities. Demi Moore was the most famous that I could see from our table. That hit the spot.

Now to find a bar that was still open might be a challenge.

The one we chose to check out was a wild little place called the rainbow room. It was a large place but sectioned off into several tiny spaces, which were too crowded for our liking. It was really interesting though, and the people watching was top notch. There were people from all walks of life there, from Yuppies, to Punk Rockers, to Goth, to Hippies.

We did stop for a second to watch a sort of bizarre performace. It was a female led band tucked away in a room the size of a bedroom. Seriosuly, the bar was an old house at one point and I think that room was previously used for a bedroom. About 5 people, 3 of whom were photographers, were able to fit in the room with all the drums and band members. They were really good but since we never made it through the door and it was not prime for hanging out for long.

It was now approaching 3 a.m. and nowhere else was serving beer so we called it a night and began heading home. On the drive we discussed that we wanted to get a picture together by something famous that we both liked. We decided on finding Gordon Ramsey’s Hell’s Kitchen, the restaurant that they filmed the L.A. seasons of the TV reality show at. It would have to wait until tomorrow as the need for sleep was overtaking our adrenaline from earlier.

The next day after breakfast we got online to see where the exact location of the restaurant. To our dismay there were three listed but it was hard to make out which was the actual restaurant. And we did not find where someone had actually been to one to verify its whereabouts. So we just started we the first address we found.

It was a bust, it was just a small warehouse, not sure what role it had played, but it was not what we were looking for. Good thing was, it had been only 10 minutes from the hotel. No big deal. The wedding was that afternoon and we had no more time to explore and would have to resume the search the next day.

The wedding had many stories played out but will wait for another time to be recounted. That next day after walking the boardwalk again and hanging at the beach and bars most of the night it was time for friends to part. I took Mark, and Dink to the airport in the early afternoon. My flight did not go out until 1:30 a.m. and I volunteered Skippy to take me early, as I wanted to resume our search. Not so much as to really find it, but it gave us a purpose to our wondering. It was just fun to hang out together and spend time.

I plugged the next address on the list and we were off. Another bust. While it was on a studio property, it looked just like some storage warehouses again. For sure the next destination would be where it was located.

Hell’s Kitchen never surfaced at that location either; curiously enough it was another set of warehouses. Could the restaurant be just a stage trick? On screen it looked like a major restaurant on a bustling street in L.A. But this was Hollywood, where nothing is actually real.

Skippy also wanted to see Mann’s Chinese Theater and the Walk of Fame. It was so crowded that we never stopped the car to get out. I think we were Hollywood-ed out at that point.

Now I noticed we were running a little late for flight, I wanted to get there with an hour to spare and we were cutting it close. But thanks to some road rally-esque driving down blvd, we made it on time. And I know it was crazy because it was even making Skippy nervous the way traffic was moving. I really wasn’t doing it on my own; I was merely keeping up with the flow and trying not to be run over! What was funny, was that Skippy was acrtually nervous. The guy who, while having his Toyota 4×4 truck loaded with people hanging off everywhere, would go zooming down the streets, in and out of parking lots, on medians, shoulders, all with the theme from Beverly Hills cop blaring on his radio and his volunteer fire department sirens roaring. I can still hear the music…”Shakedown, breakdown, takedown. Everybody wants into the crowded light. Breakdown, takedown, your busted …” 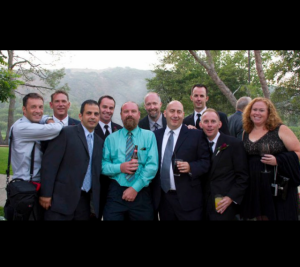 This was taken at Sean's wedding. Skippy is the one front and center with the teal shirt. Their were 2 guys missing from the sot, Kevin and Sean as they were probably off spooning somewhere *LOL*

I did make my flight and I hated to bid farewell as it had been an awesome weekend, but I was missing my family also. What annoyed me was that I did not make my connecting flight in Houston because we were slow getting off the ground in L.A. and the passengers unloading the plane when we landed were extremely slow. I tried, I ran as much as I could but was at the mercy of the inter-terminal monorail system and just could not cover enough ground. I was 3 minutes late and the plane was already gone from the gate. My reunion would have to wait an additional 2 hours.

When I finally got on the ground and saw Nora and Sharon I was so happy. Nora ran to me yelling “Daddy, Daddy, Daddy!” It just made my heart melt. Time goes by so quickly. Thank goodness for friends and family to make that time a good one.